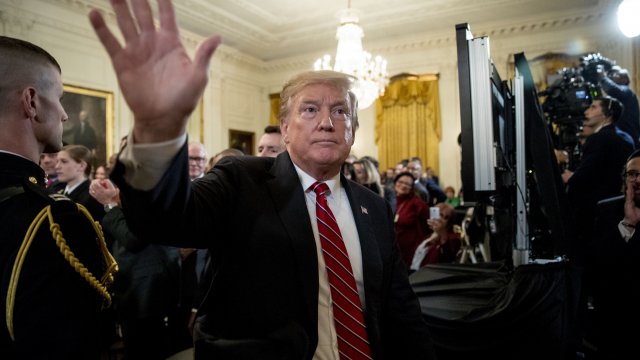 SMS
Activists Ask Trump To Use His Own Legislation To Free Federal Inmates
By Jamal Andress
By Jamal Andress
March 27, 2020
The Trump administration has alluded to a plan to free "nonviolent" at-risk federal prisoners but has yet to pull the trigger.
SHOW TRANSCRIPT

President Trump signed the criminal justice reform bill, known as the First Step Act, into law in December 2018. And he's made that legislation a major talking point throughout his presidency.

Now, with the coronavirus spreading across the country and positive cases popping up in federal prisons, the same people who helped President Trump pass this legislation are pleading with him to use it to release at-risk prisoners.

JESSICA JACKSON: "We're certainly calling on the administration to tell the BOP to exercise their authority and to really let people out so that they can engage in safe social distancing."

Jessica Jackson worked with the White House on the First Step Act. She says by taking advantage of the compassionate release provision in this law, the Bureau of Prisons could release high-risk prisoners — specifically the elderly and those with pre-existing conditions.

JACKSON: "We have multiple suspected cases inside of the federal prison. It's already in there. You're not going to be able to quarantine everybody. … which is why it's so important that we thin out that prison population and get the most vulnerable people out."

The Bureau of Prisons announced this week 10 inmates and eight prison staff have tested positive for the coronavirus. In response, the BOP will be quarantining new inmates for 14 days across all federal prisons to try to slow the spread of the outbreak.

The Trump administration has alluded to a plan to address federal prisoners but has yet to pull the trigger.

REPORTER: "I wanted to ask if you're considering an executive order to free elderly, nonviolent criminals from federal prisons?"

Thursday, Attorney General William Barr also expressed concern about the coronavirus before directing the Bureau of Prisons to expand the use of home confinement during this outbreak.

RING: "It's the culture. I mean, it's just one of those things when you're a hammer, everything's a nail. And for prosecutors and prison wardens, you know, the culture is not to find ways to get people out of prison."

RING: "Oh, we're very concerned. Look, this is not the ideal way to do it. This is a Hail Mary because even under the First Step Act, the person who applies has to give the bureau 30 days. So you know, I don't know what's going to happen in the next 30 days. This thing is hitting the prisons now."

More than 10,000 people in federal prison are over age 60, and experts have consistently said if this virus makes it into the prison system it could be devastating.

JACKSON: "I had one guy who I've known for years, who called and he started telling me what to do if he dies. Because that's how scared he was and how sure he is that his facility where there's already been coronavirus won't be able to handle an outbreak. And it's terrible. These are people. They made a bad decision. We've all made bad decisions. But they shouldn't die because of it."