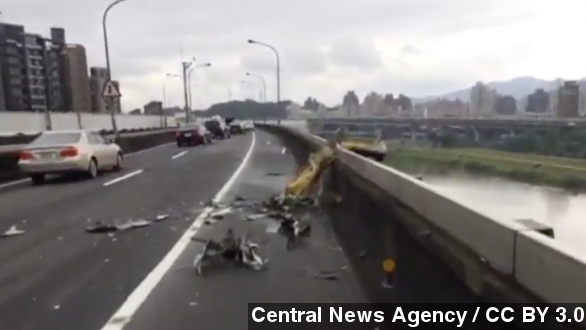 Twenty-three people are confirmed dead after a plane crash in Taiwan's capital, Taipei.

The small aircraft crashed into the Keelung River shortly after taking off from Taipei's Songshan Airport.

Officials believe the plane struck a bridge before falling into the river below. The footage in this video seems to support that belief. (Video via Central News Agency)

The flight was headed for an island just off the coast of Fujian and was carrying 58 people onboard.

And The China Post says the plane's pilot radioed one of the engines had gone out before the crash.

Rescue crews arrived on scene to pull surviving passengers from the wreckage. After passengers were taken from the plane, crews began removing the airplane from the water. (Video via TVBS)

According to BBC, at least 15 passengers have been taken to the hospital. Rescue efforts were still underway as of early Wednesday morning.