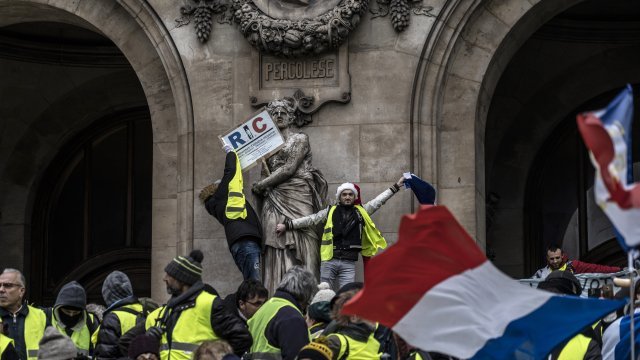 By Katie Cammarata
December 16, 2018
Officials say some 66,000 people showed up across France to protest on Saturday.
SHOW TRANSCRIPT

At least eight people have died amid violent protests in France that have continued for the fifth weekend in a row.

The so-called "yellow vest" demonstrations originally started in mid-November to protest a gas tax hike but have since expanded to cover a number of other issues. France's finance minister said they've hit the country's economy hard, affecting retailers, hotels, restaurants and other businesses.

Earlier this month, French President Emmanuel Macron's administration suspended that gas tax hike until 2020, saying "no tax deserves to endanger the unity of the nation."

Macron addressed the French people last week for the first time since the start of the protests. He took partial blame for the violence and promised a minimum wage increase and economic reforms.

While there has been a decline in the protest turnout, officials told the BBC that some 66,000 people showed up across France to protest on Saturday.