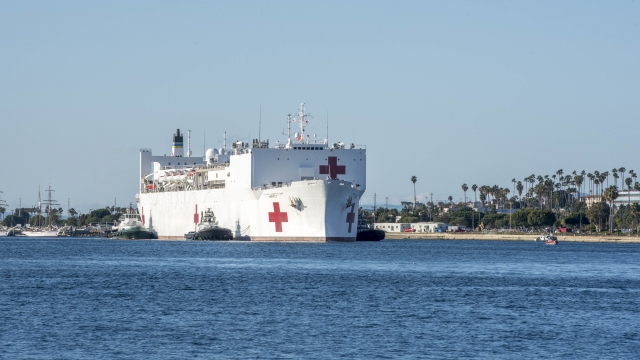 SMS
At Least 7 USNS Mercy Crew Members Test Positive For Coronavirus
By Katherine Biek
By Katherine Biek
April 14, 2020
The Navy said the crew members, as well as people they were in contact with, were taken off the ship.
SHOW TRANSCRIPT

At least seven crew members who were on board a U.S. Navy hospital ship docked in Los Angeles have tested positive for COVID-19.

The Navy confirmed all seven sailors are now being isolated away from the USNS Mercy. People who had close contact with the crew members have also been taken off the ship as a precaution.

A Navy spokesman said the spread of coronavirus among crew members has not affected the ship's ability to treat patients.

The Mercy was initially deployed from its home port of San Diego to Los Angeles in late March to help relieve stress on local hospitals by caring for non-coronavirus patients.

In an effort to protect the elderly, Gov. Gavin Newsom announced the Mercy would also prioritize bringing healthy senior citizens on board from nursing homes that have become infected with COVID-19.

The 1,000-bed ship is staffed by hundreds of Navy medical and support staff members, as well as civil service employees.

One person aboard Mercy's sister ship USNS Comfort — which is docked in New York City — has tested positive for COVID-19. They are being isolated on board.