At Least 7 Have Died In California Fires, Weather Could Be Improving 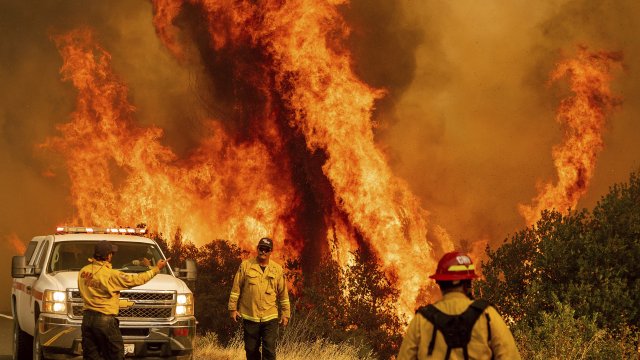 SMS
At Least 7 Have Died In California Fires, Weather Could Be Improving
By Bailey Vogt
By Bailey Vogt
August 25, 2020
A quarter of a million people are under evacuation orders and warnings. Gov. Gavin Newsom calling the fires "historic."
SHOW TRANSCRIPT

At least seven people have died across California as firefighters continue to battle three big fires around the Bay Area.

Blazes in California have scorched some 1,900 square miles and 1,200 buildings, leaving a quarter of a million people under evacuation orders and warnings. Gov. Gavin Newsom has called the fires "historic."

However, the weather is taking a turn for the better. Humidity is rising and there don't appear to be any more lightning strikes in the forecast — which sparked some fires a week ago.

The state has had more than 13,000 lightning strikes since mid-August.