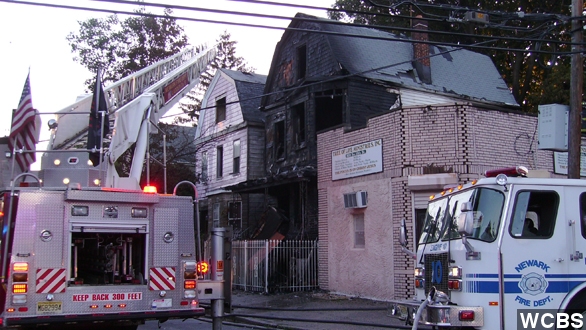 "Tragic, heart breaking day for them. Especially on this Father's Day and there was a father who lived in that house and grandchildren involved... Firefighters have not identified the victims of this fire and right now they are continuing to comb through the wreckage." (Via WNBC)

Authorities believe the fire started around 4 a.m. WCBS reports when firefighters arrived at the 3-story house, the fire was already out of control and had spread to a neighboring home. One fire official told the outlet, "We don't know exactly where it started at this point.. There was a lot of fire, so that's going to take a little bit of working out to find the actual point of origin."

"Neighbors say an elderly couple, their mentally challenged daughter and a 16-year-old male lived in the house, however fire officials are not confirming who was in the home... They have, this morning, removed the remains." (Via WABC)

The family pastor, who lived near the family said they also had two grandchildren but it's not yet known if they were also in the home. Neighbors and loved ones gathered outside to remember the family.

"They're going to be missed because they helped us all, they helped everybody. You needed something to eat they fed you. They just did everything."

"They're very good people. They're from St. Vincent I believe... but they've been here many years." (Via WCBS)

Authorities say they will not release the names of the victims until the investigation is further along.