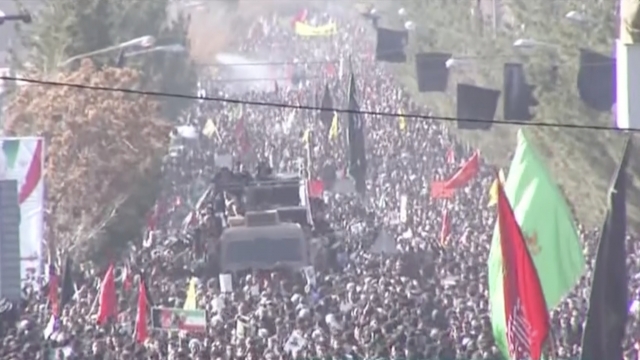 SMS
Over 50 People Killed In Stampede At Soleimani's Funeral
By Ahmed Jawadi
By Ahmed Jawadi
January 7, 2020
​According to Iranian state media, at least 56 people were killed and 213 more were injured in Maj. Gen. Qasem Soleimani's hometown of Kerman.
SHOW TRANSCRIPT

Dozens of people in Iran were killed in a stampede on Tuesday during the funeral procession for Iranian Maj. Gen. Qasem Soleimani.

According to Iranian state media, at least 56 people were killed and 213 more were injured amid a stampede in Soleimani's hometown of Kerman. The stampede reportedly occurred as the procession began, though it's not yet clear how or why it started. The deaths, along with the event's massive turnout, led to the general’s burial to be delayed.

Tuesday's procession follows an even larger one that was held in Tehran on Monday. It's estimated that more than 1 million people flooded the streets of Iran's capital to mourn Soleimani. Supreme Leader Ayatollah Ali Khamenei broke down in tears multiple times as he prayed over the general's casket.

Soleimani was killed in Iraq on Friday in a drone strike at the direction of President Donald Trump. Multiple Iranian leaders have since called for retaliation for the killing.