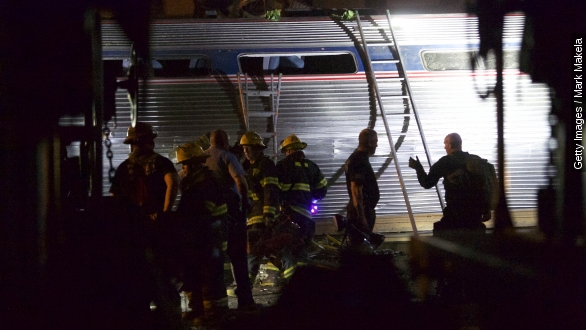 We’re getting more details about the possible causes behind Tuesday night’s fatal train derailment in Philadelphia.

At least seven people were killed and dozens injured when an Amtrak train headed to New York left the tracks during a sharp turn at around 9:30 p.m. local time. (Video via WTXF)

Wednesday, the National Transportation Safety Board said the train had been traveling at more than twice the authorized speed in the turn before the engineer hit the brakes.

Spokesman Robert Sumwalt also cleared up a bit of confusion over how a train could even reach that speed.

Positive Train Control systems are a standard safety feature that limit trains' speeds, and every major railway is required to have one installed by the end of the year. But this section of track was still unequipped.

"Based what we know right now, we feel that, had such a system been installed in this section of track, this accident would not have occurred," Sumwalt said.

Dramatic footage from the accident was captured by passengers, who posted photos and videos of emergency crews rescuing people trapped inside the cars.

The victims are being slowly identified. Wednesday afternoon, Wells Fargo confirmed one of its vice presidents, 55-year-old Abid Gilani, was among the dead, and The New York Times reported tech company CEO Rachel Jacobs, who had earlier been reported missing, was also one of the victims.

The U.S. Naval Academy had earlier identified one of those killed as an attendee. The mother of 21-year-old Justin Zemser told WNBC he was on his way home to New York.

The Associated Press also confirmed one of its staffers among the dead. Jim Gaines, a 48-year-old father of two, was with the AP for nearly two decades.

The NTSB says its main duty is to preserve evidence from the accident so it can be analyzed later. It plans to move the train cars to a secure location and also has recordings from the train's instruments.

This video includes images from Getty Images and Sturmovik / CC BY SA 3.0.