At Least 40 People Have Died In Ongoing Protests In India 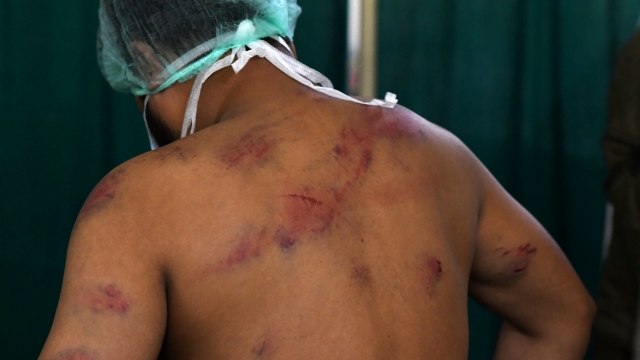 SMS
At Least 40 People Have Died In Ongoing Protests In India
By Adam Elrashidi
By Adam Elrashidi
February 28, 2020
At least 40 people in northeastern Delhi have been killed amid ongoing protests over India's controversial citizenship law.
SHOW TRANSCRIPT

At least 40 people in Delhi have died amid ongoing unrest over India's Citizenship Amendment Act, or CAA. The violence is reportedly the worst to occur there in decades, with Hindu nationalists attacking anti-CAA protesters in Muslim-majority communities.

One Hindu man in Delhi told The Associated Press that his son's blood was on the hands of a local member of the ruling right-wing Bharatiya Janata Party, or BJP. A Muslim man told the news outlet: "If they burn our mosques, we will rebuild them again and pray. It's our religious right, and nobody can stop us from practicing our religion."

Violence erupted in Delhi on Sunday, just as President Donald Trump was arriving to meet with Indian Prime Minister Narendra Modi and BJP officials. On Wednesday, Modi appealed to Delhi residents to maintain "peace and brotherhood."

But critics questioned why the prime minister took so long to address the situation. They also accused Modi, the BJP and Delhi police of fomenting the unrest.

Mohammad Zubair: "Twenty to 25 people started to beat me. The rest were standing by as if they were watching a show. There were thousands behind them. They kept hitting me. Nobody stepped forward to save me."

India's parliament passed the CAA in December to fast-track citizenship for non-Muslims from three Muslim-majority countries. Opponents argue the CAA not only violates India's secular constitution but is also biased against Muslims and meant to advance the BJP's broader Hindu nationalist agenda.