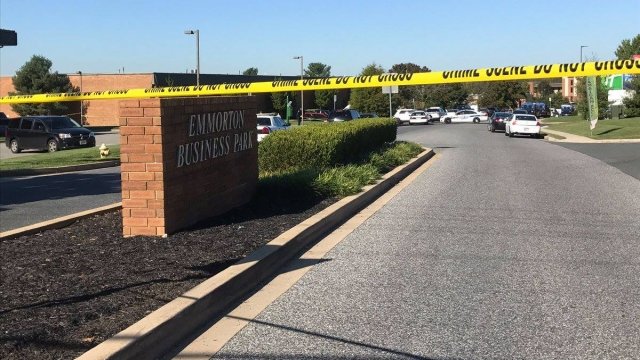 SMS
Suspect Captured After Shootings In Maryland, Delaware Leave 3 Dead
By Briana Koeneman
By Briana Koeneman
October 18, 2017
Police say five people were shot, three fatally, at a business in Maryland. The suspect is also accused of another shooting in Delaware that same day.
SHOW TRANSCRIPT

The man suspected of shooting six people, three fatally, across two locations in Maryland and Delaware is now in police custody.

Harford County Sheriff Jeffrey Gahler told reporters five people were shot at Advanced Granite Solutions at the Emmorton Business Park in Baltimore at about 9 a.m. local time. Three died, and two were taken to the hospital in critical condition.

In a later press conference, Wilmington Police Chief Robert Tracy said the suspect drove to a car dealership, shooting and injuring another man before driving away.

Police identified the suspect as 37-year-old Radee Prince and confirmed all of the victims had prior connections with him before the shootings. Prince was reportedly taken into custody in northern Delaware.

The hunt for Prince involved state police from Delaware, Pennsylvania and Maryland, as well as the FBI. A motive for the shooting has not been identified.