At Least 23 Dead Amid Ongoing Protests Of Indian Citizenship Law 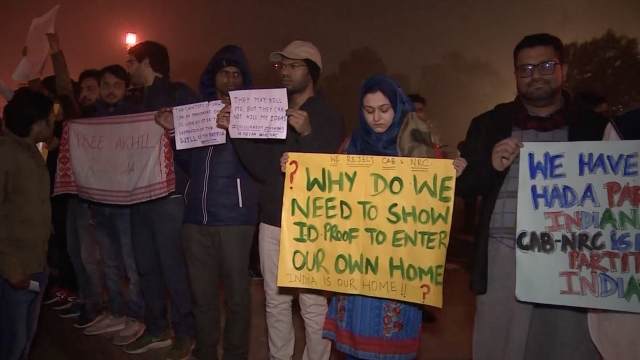 SMS
At Least 23 Dead Amid Ongoing Protests Of Indian Citizenship Law
By Adam Elrashidi
By Adam Elrashidi
December 23, 2019
About two dozen people in India have died amid ongoing protests against a new citizenship law, which critics say discriminates against Muslims.
SHOW TRANSCRIPT

At least 23 people have died across India in ongoing protests against the country's new citizenship law.

In the northern state of Uttar Pradesh, police reportedly cracked down on demonstrators, taking at least 600 into custody. The state is a stronghold of the ruling right-wing Bharatiya Janata Party, or BJP, which enacted the law.

The Citizenship Amendment Act, or CAA, offers a fast-track to citizenship for persecuted religious minorities from Pakistan, Afghanistan and Bangladesh, but excludes Muslims such as the Ahmadiyya, Hazara or Rohingya. Critics say the law is not only discriminatory, but in violation of India's secular constitution.

Opponents of the CAA argue that it's part of the BJP's broader effort to advance a Hindu nationalist agenda. They cite the recent annexation of Kashmir and the reported removal of nearly 2 million people in Muslim-majority Assam from the National Register of Citizens.

Activists have also raised concerns over the possibility that longtime residents would be put in detention camps for being unable to prove their Indian citizenship.

Indian Prime Minister Narendra Modi, though, has dismissed such concerns and referred to the CAA as a humanitarian gesture. On Sunday, he said, "Muslims who are sons of the soil and whose ancestors are the children of mother India need not to worry."