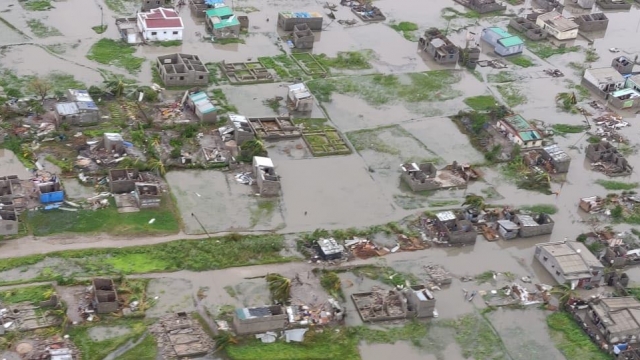 SMS
At Least 215 Dead In Southern Africa Following Cyclone Idai
By Katherine Biek
By Katherine Biek
March 18, 2019
The cyclone made landfall Thursday in central Mozambique before moving into Zimbabwe and Malawi.
SHOW TRANSCRIPT

At least 215 people are dead in southern Africa after a devastating cyclone swept through the region last week.

Cyclone Idai made landfall Thursday in central Mozambique, bringing with it heavy rains and sustained winds measuring more than 100 miles per hour. The storm then moved into both Zimbabwe and Malawi.

A team of aid workers from the International Federation of Red Cross and Red Crescent Societies reached the Mozambican city of Beira Sunday. That team reported the city is almost "completely destroyed," describing the damage as "massive and horrifying."

Meanwhile, in Zimbabwe, the government declared a state of disaster in affected areas. The country was already suffering from a severe drought that affected its food supply before the cyclone hit.

The IFRC warned that the death toll from the cyclone could rise as the full extent of the damage is investigated. It also warned that more heavy rains are in the forecast for the region.