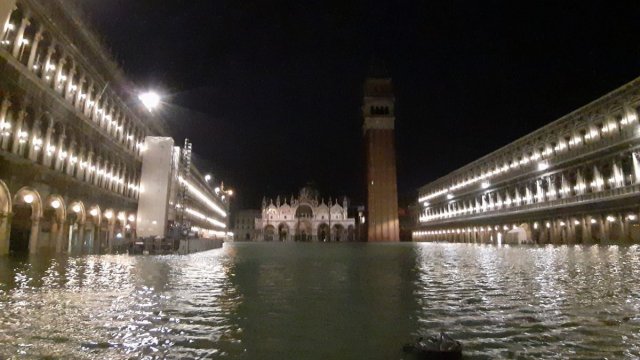 At least one person is dead in Venice after the highest tide waters in half a century left much of the Italian city underwater.

A spokesperson for Venice's mayor told CNN the unnamed man was killed while he was trying to run electric pumps at his home Tuesday night as rising flood waters swept through the area.

Venice officials said the historic high tide peaked at over six feet Tuesday night. And it left behind substantial damage to homes, businesses and other structures.

Footage from the city showed flood waters spilling into hotels, restaurants and other tourist destinations. St. Mark's Square was swimming in knee-high water, and the adjacent St. Mark's Basilica was flooded for the sixth time in its history.

Venice's mayor said on Twitter the flooding will leave "indelible marks." He blamed the historic event on climate change and called for a state of emergency.

As The Washington Post notes, experts say flooding like this could become more frequent in Venice as the sea level rises and the city continues to sink, thanks to tectonic plate movement underneath the Italian coast. Scientists warn Venice could be completely underwater by the end of the century.