At Flooded Offutt Air Force Base, "Recovery Will Take Months" 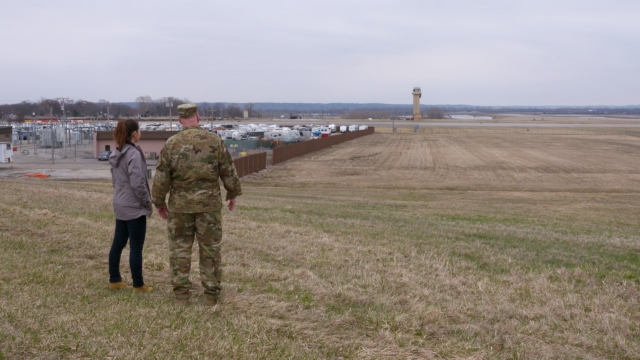 Recovery will be long and tedious for Offutt Air Force Base, which which experienced historic flooding this spring. Colonel Vance Goodfellow runs the emergency and recovery operations at Offutt Air Force Base in Nebraska. The south end of the base borders the Missouri River. Since March 15th, Goodfellow says cleanup efforts have been non-stop, sometimes 20 hours a day. At its worst, roughly 1.2 million square feet of Offutt was underwater.

"We've cleaned up some of the areas here, but all, everything we're driving through right now, was under anywhere between a foot and a half to some places up to eight, to maybe ten feet of water at points in time," Col. Goodfellow said. He lead Newsy through a closed section of a base where before the floods, 3,000 people worked.

"This is all closed off at this point in time. We've done our inspections. We have roughly about 44 preoccupied, personally occupied facilities down here. And we've done full bio-environmental and fire inspection of those facilities and are now starting to turn those over to the contractor for their first order assessments as well as scoping out what that work looks like."

Colonel Goodfellow expects it will take the remediation experts another month just to finish assessing the damage to buildings, in addition to removing the expensive communication equipment held inside. The flooding also brought unique safety concerns. The EPA says it has coordinators on site working to prevent chemical spills like one from this million-gallon diesel fuel tank – tipped over by the floodwaters. 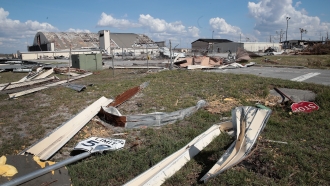 "Safety is job one for team Offutt. So it's kind of second nature to us, but as the floodwaters came in safety was paramount. We did a step by step process of rolling, shutting down facilities, shutting down power associated with that. And then at the recovery phase of it, we had professionals: bio-environmentalists as well as fire inspectors go into each facility and clear them for return of personnel to collect personal items," Goodfellow said.

Officials expect rebuilding the base will be costly and time-consuming. The U.S. Air Force had said it needs almost $5 billion between now and 2021 to repair Offutt and Tyndall Air Force Base in Florida, which took a direct hit from Hurricane Michael in October 2018. But even if Congress approves funds for repairs, it could take a long time to put them to use. 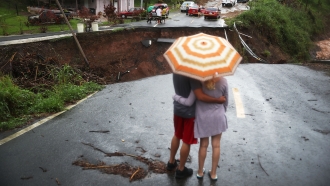 In 2011, floodwaters got to within 50 feet of Offutt’s runway. It took six years for the Army Corps of Engineers to approve construction — and work was about to start when the current flood put everything on hold again.

"We are recovering, but it's gonna take months. And the dollar value is you know just a number that we're looking at today as hundreds of millions of dollars until we get that full assessment done. We'll have a better value for you in the upcoming weeks and months," he said.

Another bomb cyclone is predicted to hit the Midwest this week, which could bring more heavy rainfall to the recovering area.