Crossing North: Asylum Seekers Use The US As A Route Into Canada 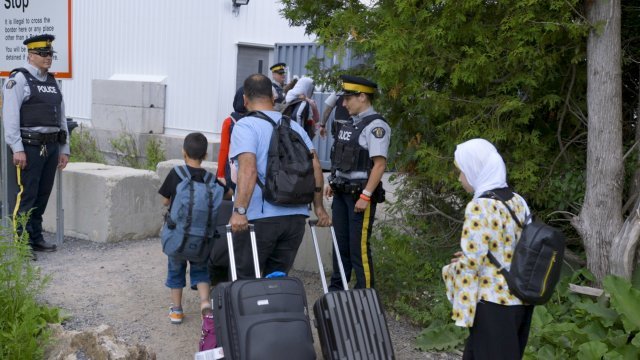 SMS
Crossing North: Asylum Seekers Use The US As A Route Into Canada
By Jake Godin
By Jake Godin
July 13, 2018
With the number of people illegally crossing into Canada on the rise, Newsy traveled to the border to speak with those on the ground.
SHOW TRANSCRIPT

More and more people are fleeing the United States for Canada. In the first three months of 2017, the Royal Canadian Mounted Police intercepted around 1,900 people illegally crossing the border to seek asylum. That number has more than doubled to 5,000 in the first three months of 2018. Some are crossing during freezing conditions in northern North Dakota while others are taking taxis to upstate New York.

- "Interceptions by the RCMP at crossings like Roxham have skyrocketed in the past couple years. More than 20,000 people were arrested in 2017 alone — the vast majority of them people crossing into Quebec. That trend has continued in 2018 with almost 10,000 interceptions in the first five months." - Government of Canada

- "And as the U.S. narrows its criteria for who qualifies as a refugee or can claim asylum, people are increasingly looking toward its northern neighbor for shelter. But there's one thing standing in their way: the Safe Third Country Agreement." - U.S. Department of Justice