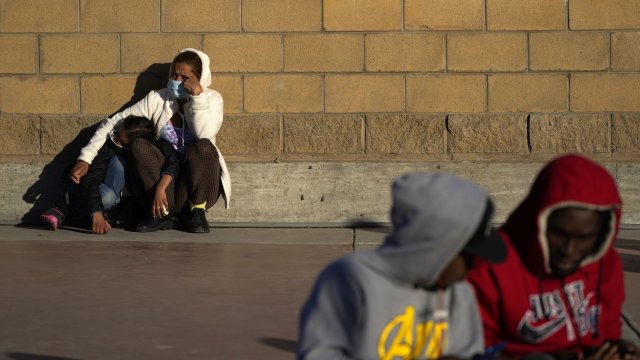 SMS
Asylum-Seekers React To 'Remain In Mexico' Policy
By Associated Press
By Associated Press
December 6, 2021
Migrants express concerns about the impacts of the Biden administration policy that will make asylum-seekers wait in Mexico for U.S. court hearings.
SHOW TRANSCRIPT

Migrants are expressing their concerns about how the Biden administration policy that will make asylum-seekers wait in Mexico for hearings in U.S. immigration court will impact them.

Trump-era policy that's being reinstated this week by the Biden government will come with changes and additions.

The first migrants are to be sent from El Paso, Texas, back to Ciudad Juarez, according to a U.S. official who spoke on condition of anonymity because details were not made public.

Timing was in flux as officials made final preparations but returns from El Paso may begin Tuesday, capped at 50 people a day.

Juan Fierro, a pastor for a shelter in Ciudad Juarez that houses migrants, said his organization is preparing for a possible influx of migrants.

"We had a capacity of 150, now we want to have a capacity of 200, 220 migrants because we believe that there will be a mobilization towards the northern border because we know that the violence is increasing, and people are moving towards safer places, and they consider that the United States is a safe place."

Honduran migrant Oneida Ardon holds on to hope "to get another opportunity" to see if they are allowed to eventually enter the United States.

Revival of the "Remain in Mexico" policy comes even as the Biden administration maneuvers to end it in a way that survives legal scrutiny.

President Joe Biden scrapped the policy, but a lawsuit by Texas and Missouri has forced him to put it back into effect, subject to Mexico's acceptance.

About 70,000 asylum-seekers have been forced to wait in Mexico for U.S. hearings under the policy that President Donald Trump introduced in January 2019 and which President Biden suspended on his first day in office.