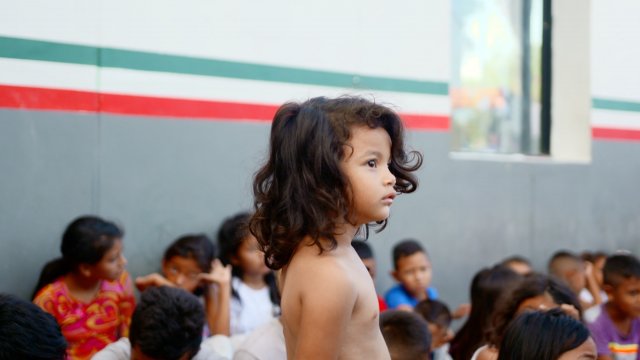 At a congressional hearing assessing the Remain in Mexico program on Tuesday, the spokesperson for a union representing asylum officers testified that he wanted to "take a stand" against immigration policies his members consider "illegal." He talked to Newsy right after the hearing about the growing tension between Department of Homeland Security leaders and asylum officers.

"They believe that these policies place asylum-seekers in harm's way and place the asylum officers in a moral and ethical dilemma because we have to implement policies that we believe are illegal and morally wrong," said Michael Knowles, the spokesperson for National CIS Council 119 — a union representing nearly 14,000 USCIS workers, including asylum officers.

The Trump administration is forcing roughly 60,000 migrants to wait in Mexico for months until the resolution of their asylum cases. The White House says having asylum applicants wait outside the U.S. ensures they don't "become fugitives." The administration exempts unaccompanied minors and other vulnerable migrants from being returned to Mexico. And asylum-seekers who say they fear persecution in Mexico can technically be exempted, too. But the roughly 600 asylum officers Michael Knowles represents say they feel implicit pressure from DHS leaders to send as many migrants as possible back to Mexico. The officers also think the standard for migrants to prove persecution in Mexico is too high and violates federal law.

"I was glad to be able to shine some light on the dilemma that asylum officers find themselves in today, and to call on Congress to investigate this more."

One asylum officer recently resigned in objection to the policy, writing in a memo to his supervisors that Remain in Mexico is "clearly designed" to keep "Latino populations from entering the United States." Knowles says asylum officers feel "complicit in human rights abuses" and are finding creative ways to avoid having to implement the policy.

"It must be said many are leaving just quietly, and they're taking their portfolio to other federal agencies or other offices within USCIS where they don't have to do this work. Many still remain on the job trying to do the job the best they can. And they live in hopes that Congress and the courts will prevail and put an end to these injustices."

A spokesperson for the agency that supervises asylum officers told Newsy by email that "it's unfortunate that union leadership distracts from the good work asylum officers do each day and instead focuses on their own policy preferences while the border crisis continues." But Knowles said during the hearing that he doesn't know "a single asylum officer in the country ... who believes Remain in Mexico is a good policy."

"We are in a very adversarial situation now with the political leadership, which has basically denigrated and disparaged the asylum corps, or insinuating that we either don't know our business or we're not dedicated to the law, and that's a great affront to the asylum officers."

"We are apolitical civil servants. We're professionals. We're experts in the field. And we indeed wholeheartedly embrace the oath that we took to defend the Constitution and apply the laws in this very important humanitarian and national security mission."