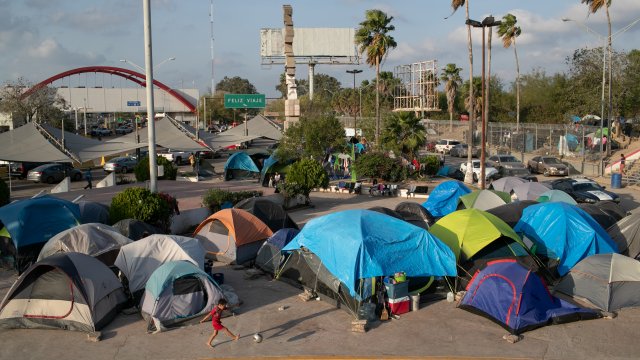 "I can say that the officers that I've spoken to are very happy with this decision," said Michael Knowles, a spokesperson for National CIS Council 119 — a union representing nearly 14,000 USCIS workers, including asylum officers.

The union had written to the court asking it to strike down the policy. It argued that the rule violates a federal law requiring the U.S. to protect people fleeing persecution.

Since Remain in Mexico was established more than a year ago, nearly 60,000 asylum-seekers have been sent to Mexican border towns to wait, for months, until the resolution of their U.S. immigration cases.

According to the union, the Trump administration told asylum officers on Friday to "immediately" stop processing migrants for the Remain in Mexico program.

The Trump administration has credited the program with allowing it to "take control of the crisis" at the southern border. The White House argued that having asylum applicants wait outside the U.S. ensures they don't "become fugitives."

But asylum-seekers Newsy talked to in Matamoros, Mexico, last summer, say they were left to fend for themselves in foreign and dangerous border towns at increased risk of kidnapping and violence.

Knowles, the union spokesperson, says the policy placed asylum officers "in a moral and ethical dilemma" because they had to implement actions they believed were "illegal and morally wrong."

"I don't know a single asylum officer who supported this policy. They all complied — they're, you know, loyal civil servants. But our officers also feel quite helpless to do the job that they were actually sworn to do, and that is to ensure the protection of refugees and asylum-seekers, not participate in actions that actually placed them in harm's way," Knowles said.

The asylum officer's role in the program was to interview asylum-seekers who feared persecution in Mexico and determine if their fears qualified them to await trial in the U.S. But Knowles says the criteria for staying in the U.S. were too tough, and officers' recommendations were often overturned.

A DOJ spokesperson says Friday's ruling "highlights the consequences and impropriety of nationwide injunctions." The Trump administration is expected to appeal the ruling or ask the Supreme Court to review the case.