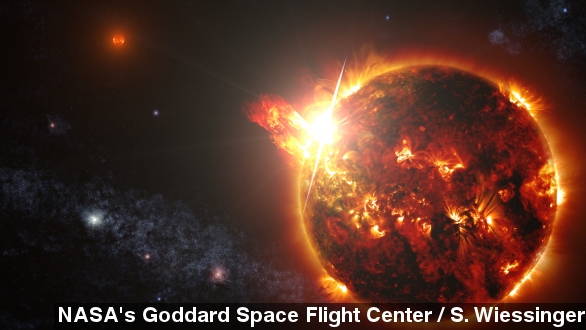 By Evan Thomas
October 1, 2014
The initial blast from the record-setting explosion would have appeared more than 10,000 times more powerful than any flare ever recorded.
SHOW TRANSCRIPT

Astronomers at NASA spotted a solar flare from a nearby red dwarf star earlier this year — the largest ever recorded.

The flare came from one of a pair of binary red dwarf stars about 60 light-years from our solar system. It's designated DG Canum Venaticorum — DG CVn for short.

They used the SWIFT gamma ray observatory — an orbital telescope designed to spot and map high-intensity bursts of radiation. And this one was very high intensity.

"The largest solar flare ever recorded happened on Nov. 4, 2003. It was so powerful that it overloaded the sensors measuring it. DG CVn's flare, however, was much larger."

The scientists say if there were instruments measuring the flare from the same distance Earth's telescopes monitor the sun, DG CVn's burst would have appeared more than 10,000 times more powerful than any flare ever recorded.

NASA says the flare was 12 times hotter than the core of our own sun and temporarily drowned out all the other light coming from the star system.

So what causes these things? Long answer, the rotation of the star causes its magnetic field to build up unsustainable levels of stored energy. Short answer, think of it like a rubber band.

DG CVn completes a revolution in less than 24 hours, which NASA says is more than 30 times faster than the spin rate of our own sun. The star's magnetic field gets torqued and twisted by the rotation, accumulating energy until something eventually snaps.

It's the same phenomenon that causes flares from our own sun, but lucky for us, not as explosively.

NASA researchers say flares from DG CVn are a common occurrence and plan to use SWIFT to monitor the system for more of them. You can learn more about the recent flare on NASA's website.

This video includes images and video from NASA.