Astronomers Had Never Witnessed A Planet's Birth ... Until Now 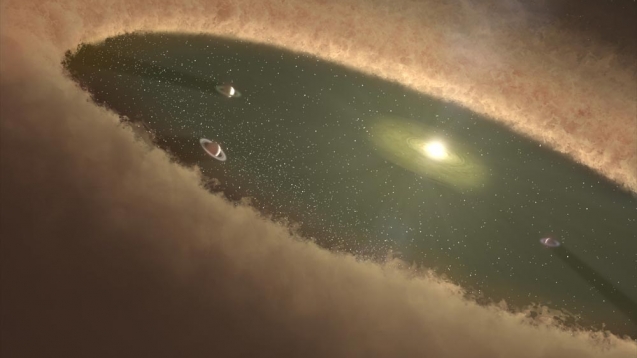 SMS
Astronomers Had Never Witnessed A Planet's Birth ... Until Now
By Grant Suneson
By Grant Suneson
November 18, 2015
Astronomers used thermal imaging to witness a planet's creation for the first time ever. The study found up to three gas giants 450 light-years away.
SHOW TRANSCRIPT

For the first time in the history of the universe, astronomers have seen a planet being born, according to a study in Nature.

Researchers from the University of Arizona have tracked down an estimated three planets near a star called LkCa 15 about 450 light-years away from Earth. All three are thought to be gas giants similar to Jupiter.

Astronomers have found about 1,900 planets beyond our solar system, but this is the first time anyone's actually seen one in the middle of formation.

Scientists have theorized disks of dust and gas circle stars while they're forming. The star stuff begins spinning faster and faster while gathering mass and clumping together before eventually becoming a planet.

But planets are relatively tiny and poorly lit, making it tough to track one down next to large, bright stars. So scientists have had a difficult time determining exactly how small clumps of dust coalesce and wind up as fully formed planets. That's where the study comes in.

Planets that are forming heat up hydrogen to temperatures of up to 17,500 degrees Fahrenheit. At that temperature, hydrogen emits a specific wavelength of light called H-alpha. Researchers were able to isolate those photons and locate the infant planets.

And this discovery could benefit future astronomers. The study's author, Stephanie Sallum, told Space.com, "It gives us a system to follow up in the future, in depth, to really understand the details of how planets form."