This Planet Is Hotter Than Most Stars, But It Won't Live Long 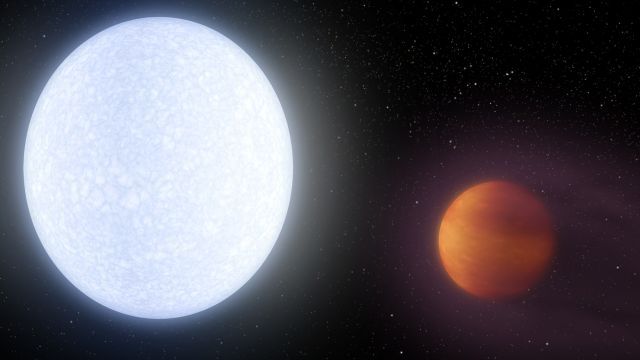 SMS
This Planet Is Hotter Than Most Stars, But It Won't Live Long
By Casey Mendoza
By Casey Mendoza
June 6, 2017
KELT-9b is the hottest planet ever discovered, but astronomers say it could vanish due to the heat.
SHOW TRANSCRIPT

Astronomers have a discovery to share, and it's hot — literally.

Researchers named KELT-9b the hottest planet ever found. It can reach over 7,800 degrees Fahrenheit — that's hotter than most stars in our galaxy.

This is because it's so close to the star. It only takes 1.5 Earth days for the planet to orbit once.

Scientists actually found KELT-9b in 2014, but at that time, its abnormal heat threw scientists off, so it was only just recently labeled a planet.

Because of the intense heat from its sun, scientists predict the planet could eventually "evaporate" away. It's disappearing at something like 10 billion or 10 trillion grams per second.

Other astronomers think before the planet vanishes, the star will swell up and swallow the planet whole.

KELT-9b was originally found with the Kilodegree Extremely Little Telescope.

But astronomers hope to continue their studies with some swanky new telescopes — like the James Webb Space Telescope, which should launch next year.