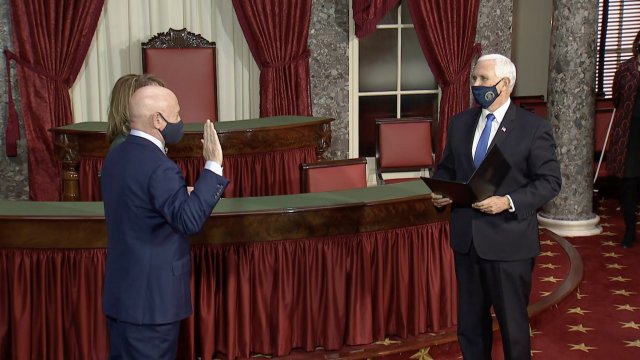 The astronaut becomes a senator.

Sen. Mark Kelly of Arizona sworn in at the United States Capitol.

Kelly was elected in November but sworn in Wednesday because he is technically filling the seat of the late Sen. John McCain until 2022.

After his swearing-in, Newsy spoke with Kelly about why he would want to be a senator. After all, he and his wife, former congresswoman Gabby Giffords, who was nearly assassinated in 2011, have already been through so much.

JOE ST. GEORGE: "You think you change this place though?"

SEN. MARK KELLY: "I think it can be changed. Change can take time. But change can be a good thing for our country."

ST. GEORGE: "Your term is only for two years. Now that you’ve been sworn in you’ve taken the oath. Would you like to be hear a lot longer than that?"

KELLY: "The important thing we address the issues Arizona is facing. We have 440,000 people who have lost their jobs by no fault of their own."

ST. GEORGE: "You visited the grave site of the late Sen. John McCain you are filling his seat. Are you worthy?"

KELLY: "He is a legend in Arizona, but this town as well. I don’t think John McCain is going to be matched in the U.S. Senate. He was a hero of mine."

ST. GEORGE: "Any measurable difference between you and President-elect Joe Biden?"

KELLY: "Any measurable difference? There are issues we don’t entirely agree on."

Whatever happens next with Sen. Kelly, Arizonans will be watching. We recently visited with this group of neighbors in Buckeye, Arizona. Kelly supporters want cooperation.

"At some point, we have to start working together," said one Arizona voter.