Asteroid's Timing Was 'Colossal Bad Luck' For The Dinosaurs 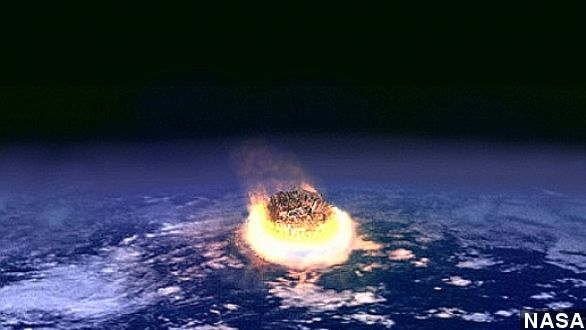 SMS
Asteroid's Timing Was 'Colossal Bad Luck' For The Dinosaurs
By Daniel Shapiro
By Daniel Shapiro
July 28, 2014
The asteroid that killed the dinosaurs struck at the worst time for them. A new study says if it had hit earlier or later, they might've survived.
SHOW TRANSCRIPT

We've all experienced bad luck before — lengthy traffic jams, alarms not going off, losing your cell phone or getting wiped out by a meteor, the usual stuff. Wait, what was that last one?

​​A new study in the journal Biological Reviews says the meteor that likely wiped out the dinosaurs struck at the perfect time. Well, not so perfect for the dinosaurs. (Via Buena Vista Pictures / "Dinosaur")

Dr. Steve Brusatte of Edinburgh University, who led the study, told Discovery the asteroid struck while Earth was undergoing climate changes caused by volcanic eruptions, tectonic events such as mountain formation and changing sea levels. This led to a weakened food chain as plant-eating dinosaurs died out.

"The asteroid almost certainly did it, but it just so happened to hit at a bad time when dinosaur ecosystems had been weakened by a loss of diversity."

Forbes quotes Brusatte saying, "Dinosaurs had been around for 160 million years, they had plenty of dips and troughs in their diversity but they always recovered."

So if the meteor struck a little earlier or a little later, would we be living alongside dinosaurs in the modern day? (Via Universal Pictures / "We're Back! A Dinosaur's Story")

Professor Simon Conway Morris doesn't think so. Conway Morris told BBC dinosaurs were less likely than animals, such as mammals, to develop intelligence. Eventually those species would get smarter and develop tools, and "from that moment the dinosaurs would have been toast."

On the other hand, study co-author Dr. Richard Butler of the University of Birmingham thinks differently, saying in a press release, "Without that asteroid, the dinosaurs would probably still be here, and we probably would not."

​The asteroid struck the Earth at what is now the Yucatan Peninsula in Mexico. It left behind a crater 110 miles wide and 12 miles deep, leading to tsunamis, earthquakes, temperature changes and wildfires.