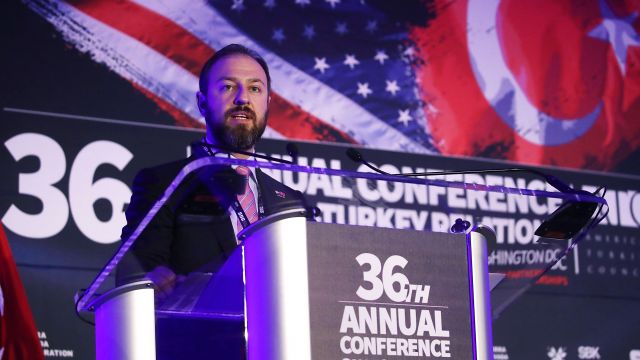 One of the hosts of a conference at President Trump's D.C. hotel is the same guy who got Michael Flynn a job lobbying for Turkey.

A conference at the Trump International Hotel is putting President Donald Trump's conflicts of interest into the spotlight again.

The Annual Conference on U.S.-Turkey Relations usually happens at the Ritz-Carlton in D.C. but is moving to the president's hotel this year, right down the street from the White House. Organizers say the Ritz wasn't available.

One of the groups hosting the event is run by Ekim Alptekin. He also founded the firm that paid former national security adviser Michael Flynn to lobby on behalf of the Turkish government.

From government contracts to foreign diplomacy, the Washington, D.C., hotel presents a lot of opportunities for corruption.

Alptekin himself has ties to the Turkish government.

There are ethical concerns here, notably from the Emoluments Clause of the U.S. Constitution. The clause prohibits presidents from accepting any sort of personal benefit from foreign governments.

And since Trump still has a stake in the hotel, he directly profits from the guests who rent space there — including conference hosts with ties to foreign governments.

The conference's website says CEOs, entrepreneurs, and key members of the U.S. Congress and the Turkish Parliament will be attending.