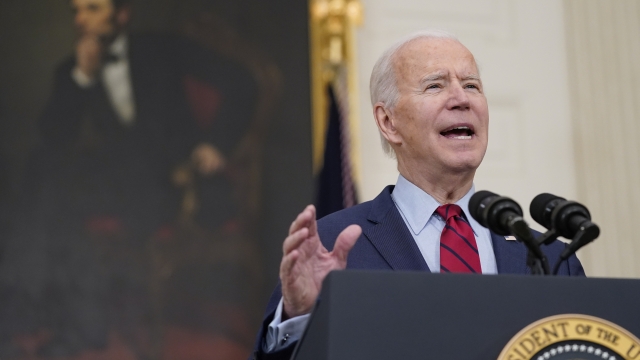 President Biden Tuesday renewed his long-standing push for what he calls "common sense" gun control to pass Congress, but did not ruling out using executive actions.

"The United States Senate ... should immediately pass the two bills to close loopholes in the background check system," Biden said Tuesday, speaking from a lecturn in the Oval Office.

"We can ban assault weapons and high capacity magazines in this country once again," Biden continued. "It passed, it was law for the longest time and it brought down these mass killings. We should do it again."

Just weeks ago, the House passed two gun control-related bills, one requiring background checks on all purchases, and another allowing a 10-day waiting period before receiving a gun.

But to get to President Bden’s desk, Senate Democrats would need the votes of at least 10 Republicans.

The work has already begun in the Senate, if only by coincidence. The Senate Judiciary Committee held a pre-planned hearing Tuesday on proposals to reduce gun violence.

But just hours after the mass shooting in Boulder, Colorado, there were few signs of consensus.

"Every time there's a shooting we play this ridiculous theater where this committee gets together and proposes a bunch of laws that would do nothing to stop these murders," said Republican Sen. Ted Cruz of Texas.

"In the dialogue about gun control, we rarely consider how many Americans are united in their advocacy and enjoyment of this right," said Republican Sen. Chuck Grassley of Iowa.

"The AR-15 is one of the most popular guns in America," Grassley later told reporters, when asked if an assault rifle ban would be appropriate.

Meanwhile, Republican Sen. Pat Toomey of Pennsylvania told reporters neither of the House’s bills have adequate support to pass the Senate.

According to Everytown for Gun Safety, the number of mass shootings (where at least four people were killed) fell during the pandemic to 17 in 2020, down from a decade high of 29 in 2019.

Monday’s shooting in Boulder, Colorado, which involved an AR-15 assault rifle bought less than a week before the attack, was the 6th mass casualty event of 2021.