Assad Finally Leaves Syria After 4 Years To Hang With Putin 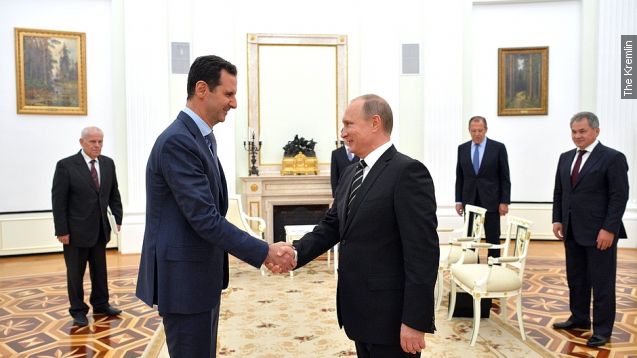 Syrian President Bashar al-Assad made an unannounced visit to Moscow on Tuesday.

He was welcomed by Russian President Vladimir Putin.

This is the first time Assad has left Syria since his country's civil war broke out in 2011. (Video via Presidency of Syrian Arab Republic)

Russia's been conducting airstrikes in Syria for what it claims is a campaign against ISIS. (Video via Talbiseh Network)

Though it's become evident that airstrikes are also aiding the depleted regime in retaking ground from rebels in non-ISIS areas.

Both Putin and Assad spoke highly of the Russian military intervention against "international terrorists" and said they support a political process to end the civil war.

Shortly after Putin and Assad's meeting was revealed, it was announced that Russia and the U.S. have agreed to meet with Saudi Arabia and Turkey over the Syria conflict. (Video via U.S. Department of State)

This video includes music from "sombre, green" by Birocratic / CC BY ND 3.0.