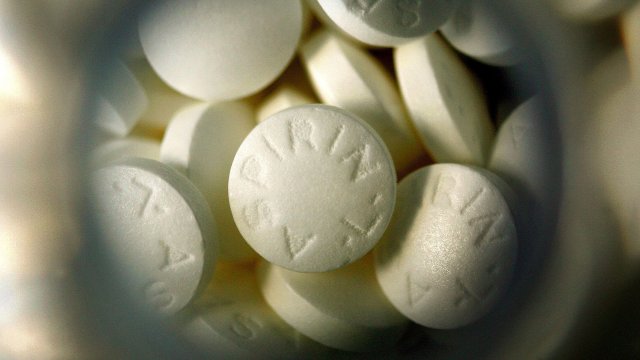 SMS
Experts No Longer Recommend Daily Aspirin For Heart Attack Prevention
By Briana Koeneman
By Briana Koeneman
March 18, 2019
According to new guidelines, the risk of bleeding outweighs the benefits of a daily low-dose aspirin regimen in most cases.
SHOW TRANSCRIPT

Health experts are no longer recommending aspirin as a way for older adults to prevent a first heart attack or stroke.

According to new guidelines presented by the American College of Cardiology and the American Heart Association, the risk of bleeding outweighs the benefits of a daily low-dose aspirin regimen in most cases.

One of the doctors who co-chaired the guidelines said in a statement to CNN: "It's much more important to optimize lifestyle habits and control blood pressure and cholesterol as opposed to recommending aspirin."

But aspirin may still be recommended for adults between the ages of 40 and 70 who are at a higher risk for cardiovascular disease as long as they're not at an increased risk for internal bleeding.

As The Wall Street Journal notes, doctors started recommending aspirin as a way to prevent a first heart attack in the 1980s and 1990s.