Asking For A Friend: Why Do People Hate Vegans? 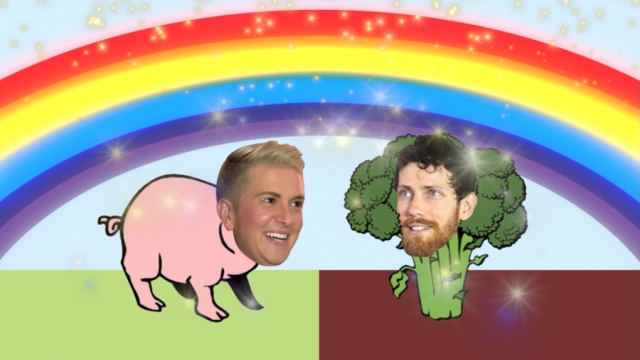 SMS
Asking For A Friend: Why Do People Hate Vegans?
By Cody LaGrow
By Cody LaGrow
July 14, 2016
Newsy's Cody LaGrow asked YouTube personality Mic The Vegan why so many have beef with people who don't even eat it.
SHOW TRANSCRIPT

A vegan, by definition, is a person who does not eat or use animal products. But it seems their care for animals gets lost in every comment section — and vegans are prone to harsh judgment by people who can't fathom a life without leather boots and chicken nuggets. Newsy's Cody LaGrow sat down with Michael Dearborn, a YouTube personality who educates the public on his plant-based lifestyle, to address why he thinks some people hate vegans.

CL: If you were to see me eating a nice steak, wearing a bib, I look like "Carrie" at prom — what goes through your mind?

MD: It's interesting. I look at everyone like where I was before I was vegan. I can be disgusted and mad at somebody for eating animals, but it's sort of like: "Don't do that to yourself. And don't do that to them."

SEE MORE: Asking For A Friend: What's It Like To Pose As A Popular Pet Online?

MD: I realized how much I cared about animals, and it's easy to realize that I was exploiting them.

CL: Do you understand the argument, like if someone has salmon, they could say, "I really didn't impact that animal's life that much"?

CL: Why do you feel like people don't make that connection? I feel like when I get a Filet-O-Fish at McDonald's, I'm not crying tears of sadness because someone died. They're tears of joy, really.

MD: People don't want to make the connection, and businesses know that.

CL: Can you love animals and still eat animal products?

CL: Since no one would eat their pet dog in America, should people start having pet cows to fill that void?

MD: I think that would help.

CL: Let's say you're on death row, probably for being vegan — what's your last meal?

MD: We've taken a turn for the worse as a culture. This is the hardest question anyone's ever asked me. It would probably just be pasta.

MD: I don't even think about cheese in pasta anymore.

CL: I had pasta last night with a four-cheese sauce with raviolis stuffed with cheese.

MD: If I want it to be creamy, I would just throw in some creamy, nutty sauce.

CL: I guess I'm just uneducated about the power of nuts.

CL: What offends you most about people who really go in on vegans?

MD: I think it's this double standard where you can be a total douche to a vegan and it's totally cool, but then the moment a vegan reacts or says something that can be interpreted as smug, then they're the worst person ever.

CL: You're a minority.

MD: Yes. Anywhere there are ideas clashing, especially between a minority and majority group, that's when people get really bad ideas of people.

This video includes clips from Mic. The Vegan, IFC Films and United Artists.