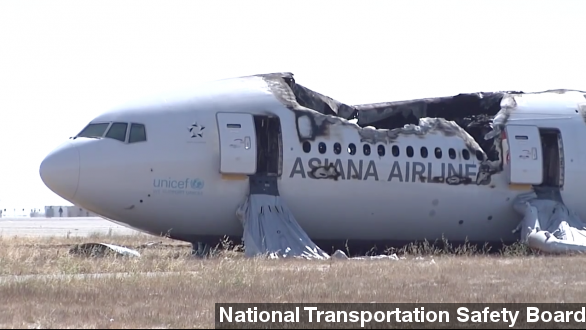 Passengers aboard the Asiana Airlines flight that crash-landed on a San Francisco runway are suing Chicago-based aircraft manufacturer Boeing for negligence.

CNN reports the lawsuit was filed in Illinois on behalf of more than 80 of the 291 passengers aboard the 777 jet last summer. The plaintiffs are asking for a jury trial and unspecified damages. (Via CNN, NTSB)

According to CNN, the suit alleges physical and mental damages, as well as medical expenses and "loss of income."

The suit alleges Boeing was aware its jet had inadequate auto-throttle control and low airspeed warning systems. (Via NTSB)

And it claims Boeing at the very least should have known the flight's four pilots weren't trained properly and weren't even qualified to fly that day. (Via Chicago Tribune, CBS)

The pilots told investigators when they realized the jet's approach speed was low, they set the auto-throttle to correct it. By the time they realized it never increased the plane's speed, it was too late. (Via Chicago Tribune, National Transportation Safety Board)

According to the Chicago Tribune, after a 2009 Turkish Airlines crash, the lawsuit says Boeing installed many of its 737 jets with audible low airspeed warning systems — which were not installed in the 777 aircraft.

Three passengers were killed in the Asiana wreck and more than 180 were injured. One of those casualties was a teenage girl run over by emergency vehicles.

Earlier this month, the girl's family filed a lawsuit against the city of San Francisco for gross negligence. (Via ABC)

As for Boeing, the company has declined to comment on the suit or any of its accusations.