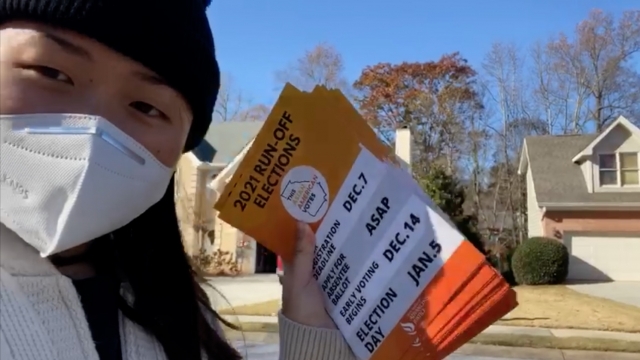 "What's important to me as a voter is that my vote actually counts," says first-time voter Haisa Nguyen.

The Democratic data firm Target Smart examined the AAPI vote in Georgia and found the surge came from older and younger voters alike. "A lot of first-time voters," says Tom Bonier, CEO of Target Smart. "So over 30% of those people who are voting in this election were voting for the first time ever in their life."

Grassroots organizations like non-partisan Asian Americans Advancing Justice Atlanta have been building community outreach for years. One of their strategies is using different languages to convince voters to turn out.

First-time voter, Haisa Nguyen also volunteered. "I had a little special translator's sash," she says, "and so I would help translate any of the stuff that they needed. A lot of them just didn't know where to go because like a lot of the signs, they are all in English."

Now the Peach State's fastest growing voter demographic could play a key role in determining who controls the Senate.

AAPIs make up just 4.7% of Georgia's voting population — but in a tight Senate race those 238,000 eligible voters might make a difference. Democrats are targeting this voting block. Former Democratic presidential candidate Andrew Yang flew in to drum up support. And both Democratic Senate candidates Raphael Warnock and Jon Ossoff have focused on this voting block as well.

While a strong majority of White voters in Georgia supported President Trump, TargetSmart credits Biden's slim 12,000 vote victory  to an increase of voters of color. To Lim that change is a collective effort.

"If it weren't for Black and Latino people coming together really and doing like all three of these groups, really putting in the work that was necessary to create change, we would not have changed the way that we're seeing it right now," says Lim.