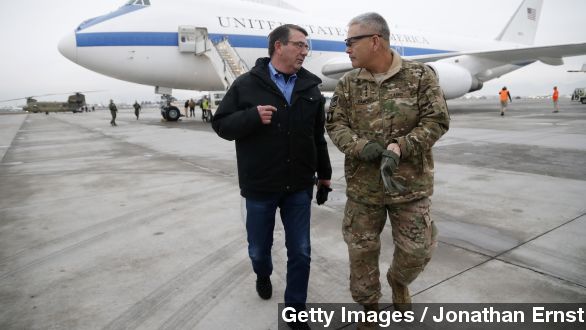 SMS
Ash Carter Makes 1st Visit To Afghanistan As Pentagon Chief
By Jake Godin
By Jake Godin
February 21, 2015
U.S. Defense Secretary Ashton Carter is in Afghanistan as the U.S. moves to withdraw its troops, but are Afghan security forces ready to take over?
SHOW TRANSCRIPT

“And for me, this is the highest honor, to be the 25th secretary of defense."

Carter told reporters during an in-flight interview en route to Kabul that his goal is to assess the current security situation in the country. (Video via U.S. Department of Defense)

There are almost 10,000 U.S. troops still stationed in Afghanistan, training and advising Afghan soldiers fighting the Taliban. Half are expected to withdraw by 2016.

But are Afghan forces — which the U.S. has spent over $50 billion training and equipping — ready to take the lead? In 2014 alone around 5,000 Afghan security personnel were killed making it the bloodiest single year for the country's security forces since the U.S. invaded in 2001. The United Nations estimates almost 3,700 civilians were killed, as well.

“U.S. forces generally say ‘The Afghan forces can hold their own,’ but in the face of an ongoing insurgency, holding their own is not a fantastic grade,” Sean Carberry, NPR’s former Kabul correspondent, told PBS Newshour.

But officials in Afghanistan and Pakistan have recently said the Taliban movement is interested in engaging in peace talks, which could bring an end to the group’s deadly attacks in both countries.

After talks with Afghanistan’s President Ghani, Carter is expected to visit U.S. troops on Sunday followed by a flight to Kuwait to meet military staff there.