The Weed Industry Is Booming, But Many Sit In Jail For Possession 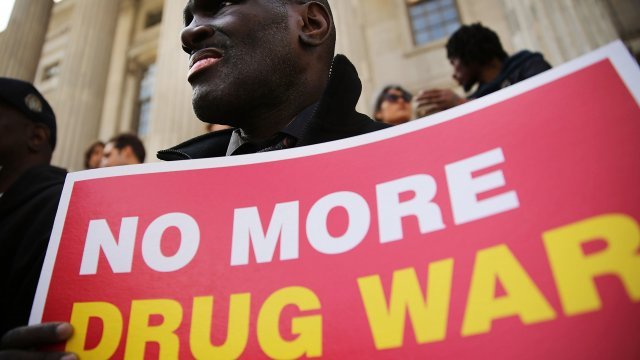 SMS
The Weed Industry Is Booming, But Many Sit In Jail For Possession
By Jamal Andress
By Jamal Andress
May 11, 2018
In 2017, the legal marijuana industry in the U.S. made nearly $9 billion. Meanwhile, 137,000 people are behind bars for weed possession.
SHOW TRANSCRIPT

In 2017, the legal marijuana industry made nearly $9 billion in sales in the U.S. alone. By 2021, that number will have more than doubled to $21 billion. Not only that, but marijuana business owners are estimated to owe $2.8 billion in taxes to the federal government by the end of 2018.

Meanwhile, at least 137,000 people in the U.S. are behind bars for drug-possession charges. More people were arrested in 2016 for marijuana possession than all violent crimes that year combined. And in 2014, black people were nearly six times more likely than their white counterparts to be in prison for drug possession.

Vincent Southerland is the executive director of the Center on Race, Inequality and the Law at the New York University School of Law. But before that, he was a public defender for years.

In April, former House Speaker John Boehner said he'd join the board of Acreage Holdings, a cannabis investment company, saying his thinking on legalization had "evolved."

In response, Southerland co-wrote this op-ed in The New York Times calling for Boehner and other investors in the marijuana industry to advocate on behalf of those who are locked up on weed charges.

"Juxtapose the profit margin that Boehner stands to gain, you know, the fact that he was a lawmaker at some point who was in a position to do something about some of these really arcane and outdated and outmoded ways of thinking about marijuana. ... You can't kind of sit idly by making money hand over fist for engaging in conduct that you know that someone five or 10 or even one or two years ago, engaging the in the same conduct, would have been locked up for some period of time for and feel good about that," Southerland said.

Thirty states have legalized medical marijuana, while eight states and the District of Columbia have legalized weed for recreational use. And while marijuana arrests in those states have dropped, plenty of people are still behind bars on marijuana-related charges.

That said, some cities and states are going back to fix what they say is an oversight in justice.

Now that the substance is legal in California, San Francisco District Attorney George Gascon says his office is reviewing more than 3,000 misdemeanor and felony convictions dating back to 1975 to retroactively clear marijuana convictions.

"The only thing you can really do is have a look at who's being harmed and try to figure out, how do you fix that harm. ... Unless their offense was connected to some other criminal activity, ... there's really no reason to have those people sitting in jails and prisons," Southerland said.

Southerland says he hopes these efforts will continue in lockstep with the legalization movement across the country.