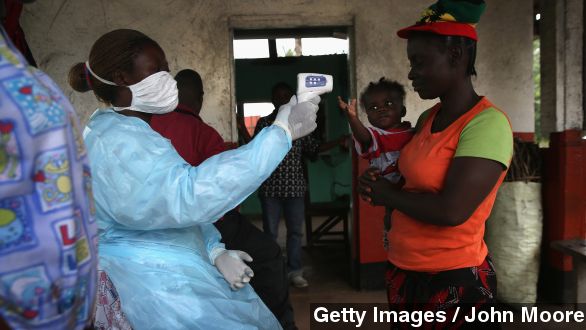 PRESIDENT OBAMA VIA CNN: "The world is looking to the United States and it's a responsibility that we embrace. We're prepared to take leadership on this."

... some medical experts are criticizing the slow global response. It's now September, about seven months after the Ebola outbreak started spreading in West Africa.

One health expert told The International Business Times, "We wouldn’t even be talking about an epidemic today," if the President's plan would've been rolled out in March. And another: "Clearly, it’s too little, too late, but ultimately we will contain it. It’s a matter of how many lives are lost in the mix."

Dr. Kent Brantly, one of the American aid workers for Liberia who survived Ebola after receiving an experimental treatment, met with President Obama Tuesday and said he's now healthy and "completely Ebola-free."

But that's mainly because he got his treatment in July, well before there was a serious push to ship any of those experimental serums abroad. Brantly addressed that when he spoke before a congressional panel Tuesday. (Video via The United States Senate)

KENT BRANTLY VIA NBC: "This unprecedented outbreak received very little notice from the international community until those events of mid-July when Nancy Writebol and I became infected. ... The response to date, however, has remained sluggish."

Brantly also told the panel: "The disease was spiraling out of control and it was clear we were not equipped to fight it effectively on our own. We began to call for more international assistance, but our pleas seemed to fall on deaf ears."

Though, it's worth noting, Brantly later praised Obama's new plan and even offered up a more "unorthodox" approach to make it more effective. It includes, "supplying individuals with personal protective equipment, disinfectant and hand sanitizers so they can more safely care for patients at home."

Another American doctor wasn't as kind when Public Radio International asked her why she thought the response from the international community has been so slow.

"I think it's racism. ... I think it’s easy for the world — the powerful world, who are largely non-African, non-people of color — to ignore the suffering of poor, black people."

On Tuesday, Obama went on to spell out his 4-tier plan to fight the epidemic, including 3,000 additional U.S. troops to West Africa and $750 million dollars in relief.