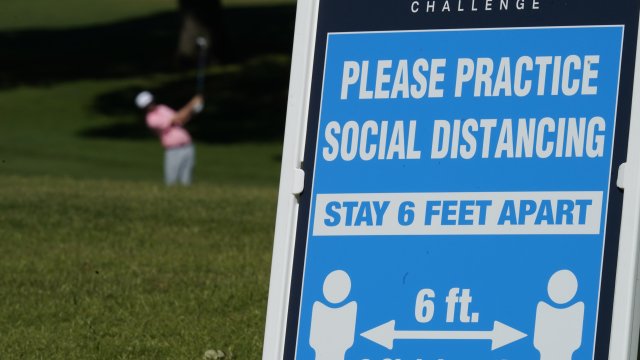 SMS
Health Experts Weigh In On Plans To Resume Pro Sports
By Austin Kim
By Austin Kim
June 15, 2020
When — and how — can professional sports resume play safely? Experts say it depends on the sport and the spread of the cororonavirus.
SHOW TRANSCRIPT

"The thing I really miss most in the summer is baseball," said Dr. Gretchen Snoeyenbos Newman.

There are a number of health professionals who cannot wait for sports to come back.

But in the showdown between emotion and public health and safety, they know which side they need to support.

So they are keeping their eyes on how certain sports plan to resume play. Those plans vary.

"Whether it is inside or outside, how many people are involved, and the level of contact between players are the three things that vary by sport that we need to be thinking about," said Dr. Snoeyenbos Newman.

Which is why some sports have been able to resume their schedules already. Right now, NASCAR and the PGA are both proceeding with weekly events in different cities. These organizations are taking precautions, which include strict social distancing measures.

"The overarching goal is not just to protect the people involved in the league but also make sure you're not a threat to public health more broadly," Dr. Binney said.

For other leagues, it'll require a transformation. The NBA, NHL, MLS and the National Women's Soccer League plan to isolate their teams in one or two cities. They'll all play in a tournament or start postseason competition.

"The devil is going to be in the details," said Dr. Bruce Farber.

Dr. Farber is chief of infectious diseases at Northwell Health in New York. He is an informal medical consultant to the NHL, but he is not designing the league's plan to return. Right now, the NHL is slated to start the Stanley Cup playoffs in two "hub" cities, with limits on who can be around the team and where they can eat, sleep and play.

"In general I think everyone is taking this seriously. I think everyone knows we are in a whole different era than what we were six months ago. Each team and each team's owner and college is going to have to go through this on their own. And although these policies and procedures and ideas may be correct, the execution will have to be careful and methodical," Dr. Farber said.

Farber warns many of these plans haven't been finalized because there are so many variables. He adds frequent testing will be critical, but that has its own issue.

"I think setting something as specific for one person shutting down the league is overly restrictive," said Dr. Snoeyenbos Newman. "At the same time, every league and every team has to be ready to shut down at any time. Where the leagues really have the ability to do well at this is keep very accurate logs of everyone this person has been in contact with. And then it is classic gumshoe epidemiology: Go through, isolate all those people on the contact list and test them all."

This is all operating under the assumption there are no fans at the events. But both the PGA and LPGA may allow fans at events next month. Health experts say that could work, given the fact golf is outside and there is a lot of space. However, NASCAR's plan to have limited attendance is a concern for Binney.

"If we put 5,000 people in Talladega, and we don't see an explosive outbreak, that's perfectly possible and even normal because this disease has a lot of stochasticity to it, which is just a fancy word for randomness," Dr. Binney explains. "We need to understand that holding one race with fans is evidence that continuing to hold races with fans is safe."

Both Binney and Snoeyenbos Newman say they "hope" other leagues such as Major League Baseball or the National Football League can get a season in ... but they say it's too soon to tell.