The Proposed Border Project Could Shut Down The Government 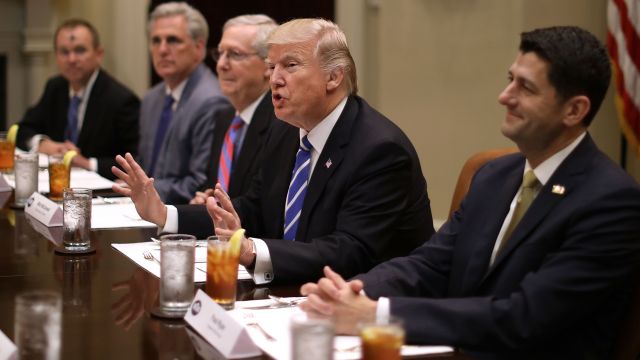 SMS
The Proposed Border Project Could Shut Down The Government
By Lindsay Gloor
By Lindsay Gloor
April 24, 2017
As Congress works to strike a budget deal, President Donald Trump is using the deadline to push his U.S.-Mexico border barrier agenda.
SHOW TRANSCRIPT

"The president, I think, talking about this wall is expressing a sign of weakness," Democratic Minority Leader Nancy Pelosi said in an interview on NBC.

"The president has been pretty straightforward about his desire and the need for a border wall, so I would suspect he'll do the right thing for sure," Secretary of Homeland Security John Kelly told CNN on Sunday.

The so-called wall was a big talking point on Sunday's political shows. And for good reason — it could launch us into a government shutdown. Congress has until this Friday to agree on funding or face a shutdown.

President Donald Trump, and other White House officials, want Republicans to use the looming deadline to push through funding for the proposed U.S.-Mexico border project.

The Trump administration has already attempted a compromise by suggesting a dollar-for-dollar payment plan, which includes $1 for Affordable Care Act payments for every $1 that goes toward the border barrier.

But many Democrats have said they are unwilling to agree to any stopgap budget that includes this type of funding.

Prior to the president's insistence on including the border barrier funding, Congress had almost reached a solution. Democrats had agreed to funding for other security measures, like drones to patrol the border.

Congress was hoping to debate the proposed barrier project separately after Friday's deadline.