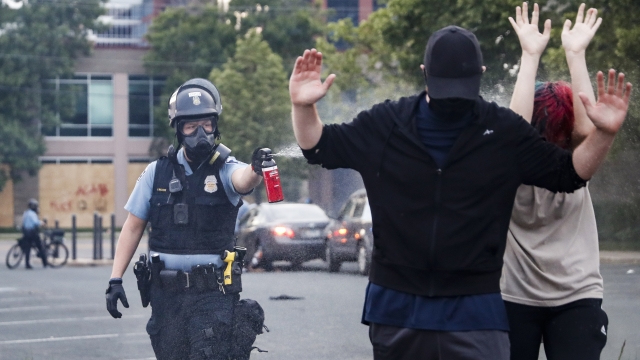 Some cities, including New Orleans, are moving toward banning tear gas and other irritants.

It's a common scene in news coverage of demonstrations: police fire some sort of chemical weapon to disperse crowds they fear are getting out of control. Clouds of smoke as protesters run away, their eyes weeping, some people even vomiting.

But as protests continue across the nation, concerns are growing over police use of these  chemicals, such as tear gas and pepper balls.

The U.S. is a member of the Chemical Weapons Convention, which considers such riot control agents to be chemical weapons. It defines "riot control agents" as any chemical that can cause rapid "sensory irritation or disabling physical effects" and quickly disappears.

Riot control agents are banned under the convention if they are used for war. However, they can be used domestically as long as the member country declares it has them.

Supporters of tear gas and pepper spray say they are effective — and non-lethal — ways to control unruly and potentially dangerous crowds. But some have died from complications related to these chemicals. People with asthma are especially vulnerable. The weapons can also increase heart rate and blood pressure, which could kill people with preexisting heart conditions.

In recent cases, the weapons have been used against peaceful protesters. Now, some cities have started moving toward limiting them. On Friday, a Colorado federal judge issued a temporary order restraining Denver police from using chemical weapons or projectiles on peaceful protesters.

And Portland, Oregon's mayor announced Saturday he's ordered the police to stop using tear gas unless there's "a serious and immediate threat to life safety, and there is no other viable alternative."

Seattle's police chief put a temporary stop to its use, and lawmakers elsewhere, including New Orleans, Washington DC, and Massachusetts, are drafting bans.