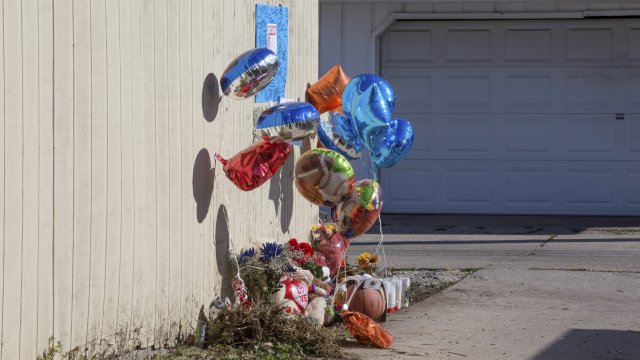 SMS
As Police Divestment Gains Support, Summer Violence Raises Tensions
By Jamal Andress
By Jamal Andress
July 6, 2020
Over the holiday weekend in Chicago, at least 15 people were killed, including a 7-year-old girl playing outside her grandmother’s home.
SHOW TRANSCRIPT

Across America, the holiday weekend meant more than celebrations and fireworks...for most of the nation's biggest cities, gun violence arrived right at their doorstep. In Chicago, at least 15 people were killed, including a 7-year-old girl playing outside her grandmother’s home.

"We can not allow this to be normalized. We can not get used to hearing about children being gunned down in Chicago every weekend," Chicago Police Superintendent David Brown said.

More than 60 people were shot, including 11 minors, just this weekend. Over the last three weeks, nine children have died from gun violence.

"When you are in this culture, there are certain coping skills and certain mannerisms that you have to develop in an effort to survive," said Cedric Frison.

Cedric Frison is an outreach worker with READI, a violence prevention organization in Chicago.

Studies show violence in large metropolitan areas tend to increase in the summer months. With warmer weather and more people outside, there's more opportunity for victimization and conflict.

But according to criminologist Thomas Abt, what we're seeing this summer is a confluence of several factors.

Abt said, "We are really in some ways in a perfect storm. We have all of the various kinds of fallout that are happening in response to the unrest triggered by the tragic death of George Floyd, combined with the exhausted capacity of public resources and people under great strain from COVID-19."

Some elected officials and community members have taken this opportunity to push back on efforts to reform or defund the police. But Abt believes police mistrust is actually a big part of this spike in violence.

Abt said, "When people lose trust and confidence in the criminal justice system, they stop using it. They stop calling 911. They stop giving information to law enforcement. … Police violence is linked to and can contribute to community violence. And so one of the things that we need to understand is that if we want to keep our communities safe, we have to avoid these situations, like the death of George Floyd."

After three years of decline, shootings in Chicago are up 42 percent compared to 2019, and homicides have risen by 32 percent.

Other big cities including Minneapolis, Baltimore and Los Angeles have seen an uptick in violence while lawmakers have either passed or promised major changes to the city's local police force.

New York, which just cut a $1 billion from the NYPD budget, has seen a 53 percent increase in shooting victims this year compared to last year.