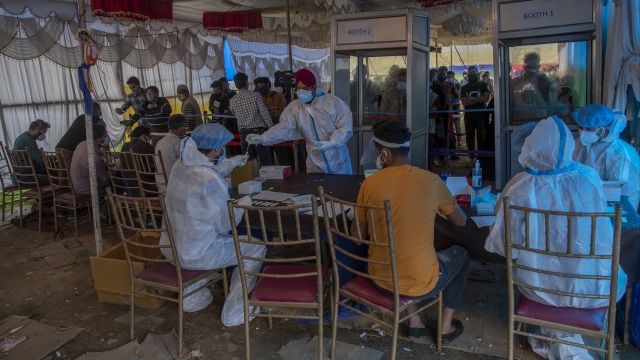 More than 44% of Americans have gotten at least one dose of a COVID-19 vaccine, but just 9% have in India.

More than a third of all Americans are now fully vaccinated, as the U.S. seven-day average of new infections continues to decline.

By official count, some 580,000 Americans have died from COVID-19 since the pandemic began. But a new University of Washington study says the actual death toll may exceed 900,000.

Whatever the number, health officials say continued vaccinations will save lives. In the U.S., more than 44% of people have gotten at least one dose of a COVID-19 vaccine. But the pace of vaccinations is slowing.

Pfizer and BioNTech are now applying full FDA approval of their vaccine, which has been administered on an emergency use basis.

Public health officials say official FDA approval could reduce vaccine hesitancy and get more shots in arms. Meanwhile, emergency authorization may be extended next week to permit 12 to 15 year olds to also receive the vaccine.

If so, that could move the U.S. closer to a goal of vaccinating 70 to 85% of the total population. That's the threshold experts believe will at last control the spread of the virus. Still the CDC and pharmaceutical companies say COVID-19 booster shots may be needed to contain highly-contagious virus variants.

“Given the nature of the pandemic, FDA will move as expeditiously as possible without compromising its gold standard for safety."

Globally, India is now the world's most severe crisis zone for the pandemic.

India reported a record of more than 414,000 new COVID-19 cases Friday and more than 4,100 deaths in a 24-hour period --also its the highest number to date. So far, just over 9% of people in India have had at least one vaccination shot.

In the coastal state of Goa, more than 51% of people have tested positive for the virus. And as more Indian states impose lockdowns to contain the spread, there is mounting pressure on the prime minister to implement nationwide restrictions.

"What we have seen especially over the last three weeks is complete policy abdication," said Yamini Aiyar of the Indian Centre for Policy Research. And certainly I hope that we hold our government accountable for what we are seeing today."

India is running out of hospital and morgue space... as well as medicine and oxygen supplies. Recently, doctors were attacked by grieving relatives of deceased patients after a hospital ICU ran out of oxygen.

Other global regions - Africa and Japan - are seeing surges. Variants are spreading in both places, and infections are particularly hitting young people in Japan - just as the country is preparing to host the upcoming Summer Olympics.