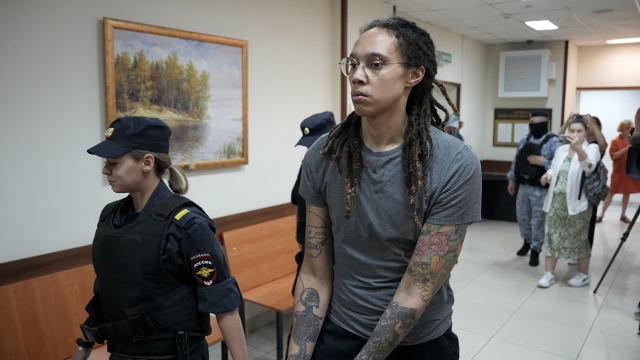 NBA players are seizing their spotlight to keep attention on Phoenix Mercury star Brittney Griner, who is detained in Russia.

Basketball is back, and as NBA season openers kicked off this week, veteran players seized the spotlight to highlight Phoenix Mercury star Brittney Griner.

"The big picture that is going on in the world is: Free our sister Brittney Griner, please. Please. POTUS, do your job. Everybody do your job. Please bring our sister home," Brooklyn Nets player Kyrie Irving said.

His message comes as tens of thousands of fans flocked to arenas across the nation and many more tuned in to to catch the first games of the season.

"I want her to know from my Miami Heat family and the NBA family, that we are still thinking about you and everything that you're going through. You are in our hearts and in our minds," Heat player Udonis Haslem said.

"We want to continue to let her name be known and we pray that ... It's been 243 days since she's been wrongfully incarcerated in Russia. We hope that she comes home soon and everybody's doing their part to get her home," Curry said.

"I just hope that our fans, Mercury fans and our community keep praying for her," Williams said.

In custody in Russia for the last eight months, Griner is serving a nine-year sentence for drug possession and smuggling. She is reportedly in a penal colony outside Moscow, where she is allowed outside for only an hour a day.

"The U.S. government continues to urge Russia to release wrongfully detained U.S. citizens Brittney Griner and Paul Whelan," State Department Principal Deputy spokesperson Vedant Patel said. "As the secretary has said, there was a substantial proposal on the table earlier this summer to facilitate their release. Our governments have communicated repeatedly and directly on that proposal and the Russians should take that deal."

Russian officials are asking that a former colonel from Russia’s domestic spy agency be included in the proposed prisoner swap, according to CNN.

The Phoenix Mercury shared a message from Griner on Twitter reading: "Thank you everyone for fighting so hard to get me home. All the support and love are definitely helping me. - BG"

The calls to action propelled Griner back into a spotlight that some fans felt was fading.

"I hear about it less and less. You know, I think the only reason that came out recently is because her birthday passed," Phoenix resident Dominic Mertz said.

In Phoenix, fans expressed concerns over Griner's treatment and health behind bars.

Griner will be back in Russian court Tuesday to appeal her sentence.

"She's been gone for eight months — a very, very long time. I don't think that the U.S. is doing enough to bring her back," Phoenix resident Javier Millan said.

"We all want to see her back. She brings out the fans. She is Phoenix. She's our Devin Booker," Phoenix resident Cedric Warren said.

"We love you Brittney and we want you to come home," Phoenix resident Natalie Parker said.

Griner's friends and family are launching a messaging campaign to keep her plight in the spotlight.

In a recent interview with CNN, Richardson said he's working with both families and the White House to coordinate the release of Griner and Whelan, adding that they could be released by the end of the year.