As Long As There Are Apple Products, There Will Be iGate 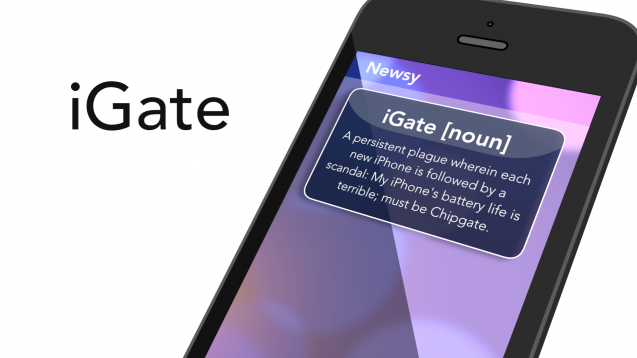 SMS
As Long As There Are Apple Products, There Will Be iGate
By Mikah Sargent
By Mikah Sargent
October 21, 2015
iGate [noun] - A persistent plague wherein each new iPhone is followed by a scandal: My iPhone's battery life is terrible; must be Chipgate.
SHOW TRANSCRIPT

Ever since the introduction of the iPhone 4, Apple's massively popular smartphone has faced an unpleasant and persistent plague — one, in the spirit of said plague, we'll call iGate.

"We started to get some reports of people having issues with the antenna system. ... People were touching X marks the spot here and they were seeing a large drop in bars," said Steve Jobs. "And this has been since dubbed 'Antennagate.'"

Antennagate was the first "gate" controversy for Apple. If you held the iPhone 4 a certain way ("X marks the spot"), it would appear as though your signal dropped significantly. (Video via YouTube / Michael Gross)

Apple remedied the issue in two ways: First, it adjusted the phone's software to give a more accurate signal reading. And second, it gave customers a free case — no "X marks the spot," no signal loss. It also gave full refunds on undamaged iPhones.

Not to be outdone, the iPhone 4S got a 'gate of its own, though this one wasn't quite as pervasive as Antennagate. Batterygate plagued enough users to pick up some headlines. In essence, users were seeing unacceptable and inexplicable battery drain on their phones. (Video via YouTube / MicBergsma)

Many suggested it was caused by a bug in Apple's iOS software. And by the time Apple updated that software, Batterygate rumblings had all but died down. (Video via Vimeo / Jeff)

But with the introduction of the iPhone 5:"Now iPhone 5 comes in this beautiful black design. The glass is all black. The aluminum is a color we call slate," said Apple executive Phil Schiller.We were introduced to Scuffgate.

The slate coloring of the iPhone 5 was created through a process called anodization. Anodization is an electrical and chemical process wherein color — in this case slate black — is added to a coating created on aluminum and other metals.

And customers found it was a little too easy to scuff their brand-new, slate-black devices. At the time, tech-teardown site iFixit did a super scientific scuff test and found assault-by-toddler would indeed scuff the device.

"Actually, it's worse than I thought. ... If you look closely, you can see a lot of the scratches," said M.J. in an iFixit video.

Apple didn't do much to address the issue during the life of the iPhone 5, apart from an email from Apple exec Phil Schiller that said scratches and scuffs were normal.

However, when Apple announced the iPhone 5s, the company revealed a new color it called space gray. The color wasn't nearly as dark as the slate black found on the iPhone 5, and it was far less vulnerable to chipping and scuffing. But as Scuffgate breathed its last breath, a new 'gate took center stage: Sensorgate. (Video via YouTube / Marques Brownlee)

Sensorgate, as the name suggests, focused on the sensors inside the iPhone 5s — the accelerometer, gyroscope and magnetometer.

Multiple reports suggested the phone's sensors were improperly calibrated, which made some motion-sensing games nearly impossible to play. (Video via Gizmodo)

And Apple confirmed the hypothesis when it released an update to iOS 7. One of the fixes mentioned "an accelerometer calibration issue." Thus, Sensorgate was squashed with a single push of the update button.

Unfortunately, Apple's next 'gate scandal couldn't be fixed as easily.

"I woke up this morning and saw a number of reports claiming that the iPhone 6 Plus was bending inside of people's pockets," said Lewis Hilsenteger in the now-infamous Unbox Therapy bend test video.

Bendgate — arguably the most highly publicized 'gate scandal — ran rampant through the media and on social media.

Many argued the iPhone 6 Plus was far too structurally unsound because of how thin Apple made the device. The company eventually issued a statement: "With normal use, a bend in iPhone is extremely rare, and through our first six days of sale, a total of nine customers have contacted Apple with a bent iPhone 6 Plus."

But outside of an Antennagate-style solution (put a case on it), there wasn't really much Apple could do to put an end to Bendgate. (Video via Speck / CC BY 3.0)

So it was left to us techie types to sarcastically tell our friends and family, "Yeah, it sure is weird how physics works. Why in the world would a thin piece of aluminum bend when you put enough pressure against it? So odd." We'd also occasionally say, "Hey, uh, if you don't want your phone to bend, maybe don't bend it."

When Bendgate eventually died down — thanks in no small part to my sarcasm — rumors began to surface that for the next iPhone, Apple would use a stronger type of aluminum, reinforce the internal structure of the phone and also use stronger glass for the screen.

Which is exactly what the company did.

POP: "The new material in the iPhone 6s and 6s Plus is supposedly two times as tough."

The iPhone 6s was far less bendable than the iPhone 6. But still not immune to a 'gate scandal. (Video via YouTube / EverythingApplePro)

See, Apple hired two different companies — Samsung and TSMC — to make processors for its latest iPhones. Those processors are only slightly different — yet different enough to cause discrepancies in battery life. Users who've tested the different devices claim the TSMC chip has two hours more battery life than the one made by Samsung. And with that realization came the scandal coined as Chipgate, the most recent 'gate to plague the company. (Video via ETrade Supply)

Apple claims the tests don't mimic real-world use so they don't provide an accurate reading of battery life. The company says its own testing shows a mere 2 to 3 percent difference in battery life between the two processors. (Video via Apple)

Whether it be a two-hour difference or a 2-3 percent difference, there's not a whole lot Apple can do to remedy this 'gate scandal.

And to make things even more fun, PC Magazine notes there are often larger discrepancies between processors made by the same company than there are in those made by two different companies.

From the precisely crafted antenna in the iPhone 4 to the fast, powerful processor in the iPhone 6s, there's no shortage of controversy for Apple's wildly popular smartphone. For every success, it seems someone will always find the worm in an otherwise well-crafted apple.

This video includes images from Getty Images, Karlis Dambrans / CC BY 2.0 and Gizmodo.