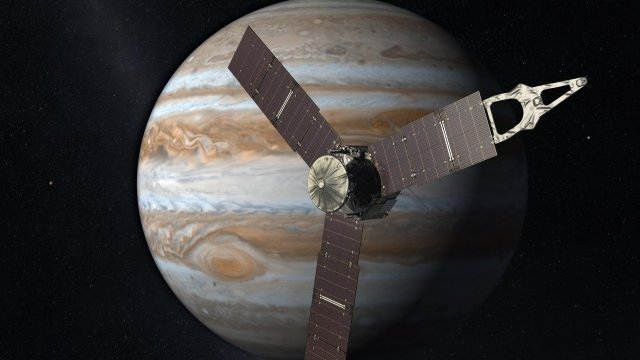 SMS
As Juno Nears Middle of Jupiter Mission, NASA Shares Newest Findings
By Tyler Adkisson
By Tyler Adkisson
December 12, 2018
Juno is one of the first probes to ever study Jupiter in detail, and it's learned so much that it may change our understanding of how Jupiter formed.
SHOW TRANSCRIPT

In December, NASA’s Juno probe will make its 16th scientific pass of Jupiter, marking the halfway point of its planned mission. The spacecraft has already given us the some of the most detailed insight ever into Jupiter's red spot and atmosphere, and at a recent American Geophysical Union conference, scientists shared more of Juno’s newest discoveries.

Juno has found Jupiter's magnetic field is much more complex and uneven than we originally thought. The northern part of the field looks especially tangled, compared to Earth's own magnetic field. Scientists say this suggests Jupiter's dense core might be dissolving into the lower layers of the high-pressure interior.

There's also good news for the Juno spacecraft itself. Interference on its navigation camera, of all instruments, helped scientists determine that the gas giant's close-in radiation is weaker than our models predicted. This means Juno might survive the high-energy environment longer than expected, and could do more science than we had hoped.

As it is, researchers already have a lot planned for the second half of Juno's mission. On Juno's 19th pass around Jupiter, they want to flip the probe upside down so it can make more detailed scans of the planet's radiation. Later orbits will also bring the probe closer to the northern hemisphere, where it can get a better look at the oddities in Jupiter's magnetic field.