As Greece Nears Default, Investors Try Not To Panic 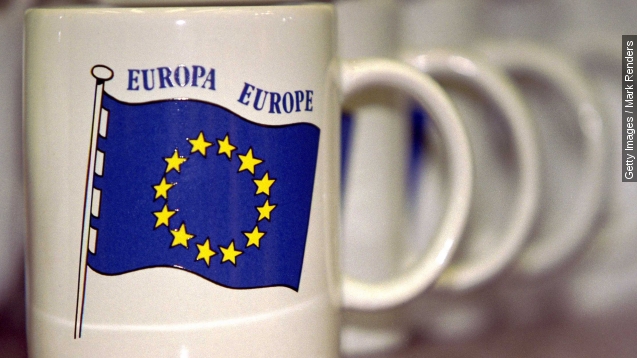 SMS
As Greece Nears Default, Investors Try Not To Panic
By Matt Patston
By Matt Patston
June 29, 2015
With Greece moving closer to a likely default, focus is turning to potential consequences. How can investors avoid a market panic?
SHOW TRANSCRIPT

If you break a dinner glass at the table, the last thing you want to do is yank the table cloth and shatter everything else, too.

Over the weekend, Greece's European creditors decided not to extend the deadline for the country's bailout package, meaning Tuesday is the country's final day. (Video via the International Monetary Fund)

In response, Greece enacted withdrawal restrictions on all its banks and called an emergency vote to decide if the country should accept its creditors' stringent demands — which leaves other European markets unsure of the future.

Worst case scenario? The collapse triggers a panic, investors pull all of their money out of uncontrollable bonds and other vulnerable countries are put in the same position as Greece.

A panic, of course, is caused by panic — letting hypothetical fears fuel short-term protective impulses. But if investors are afraid of widespread contagion, panicking is the last thing they should do. (Video via Crash Course)

A panicked investor's logic goes like this: If Greece goes bankrupt, then that means other eurozone countries can go bankrupt, too, so I should get all of my money out before the country can't pay it back. This panic then cheapens bonds. (Video via Brookings Institution)

But the fastest way for other countries — like Italy, for example — to go bankrupt is for all of its revenue to vanish and payments to climb as a result of a tanking bond market. A panicked investor is her own worst nightmare.

That's why other eurozone countries, led by Germany, are calling on everyone to stay calm and weather the storm. Ideally, struggling economies will eventually rebound with continued support, like Spain has shown signs of doing this year. (Video via U.K. Parliament)

Greece might have broken its plate at the table, but investors are now responsible for keeping the other dinnerware intact. (Video via The Slow Mo Guys)