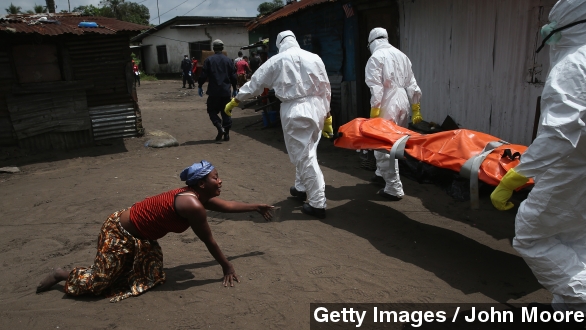 By Matt Picht
October 10, 2014
The World Health Organization says 4,000 people have died during the current Ebola outbreak as the global response still lags behind the virus.
SHOW TRANSCRIPT

The Ebola epidemic in West Africa has hit another grim milestone: The World Health Organization reports over 4,000 people have been killed by the virus during the current outbreak.

And health officials have been issuing increasingly dire warnings about the epidemic.

CDC DIRECTOR THOMAS FRIEDEN VIA WORLD BANK: "The only thing like this has been AIDS. And we have to work now to make sure this is not the next AIDS."

The virus has been rampaging across West Africa for months, and recent Ebola cases in the U.S. and Spain have heightened fears of a global Ebola pandemic. So, how's the world's response to the crisis coming along?

Countries and NGOs have pledged substantial sums of money to help fight the outbreak. The Guardian has a comprehensive breakdown of the pledges made so far, which include a $350 million commitment from the U.S., a $400 million finance package from the World Bank, and $50 million from the Bill & Melinda Gates Foundation.

Countries around the world are also sending people to help combat the virus — 100 U.S. Marines arrived in Liberia on Thursday, part of the Obama administration's pledge to send almost 4,000 troops into affected countries.

The U.K. has also promised to send 750 troops to West Africa, and countries like Germany, Cuba and China have sent or are sending medical workers to the region. (Video via Al Jazeera)

But so far, the recurring theme of the global response has been "too little, too late." The international community has been criticized harshly for failing to respond fast enough and allowing the epidemic to grow out of control.

And the disease won't be going away anytime soon. The Washington Post has a feature on Ebola's "reproduction number," the average number of people that each new Ebola patient will infect. To stop the spread of the virus, that reproduction number needs to be below one — and instead, one analyst told the Post it's currently hovering between 1.5 and two.

West Africa has seen a total of 8,399 confirmed or suspected Ebola cases since the outbreak began, according to WHO. 416 of those victims are health care workers; 233 of those workers were killed by the disease.