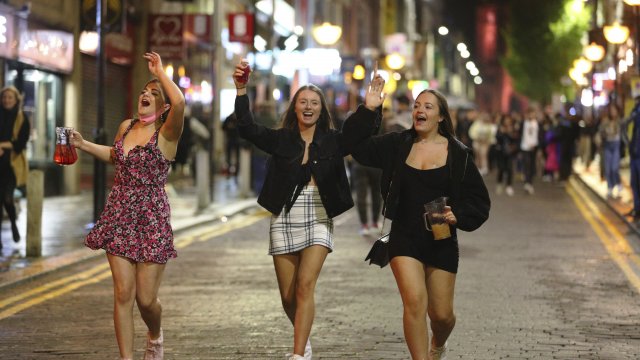 New restrictions all over Europe come amid growing "COVID-19 fatigue" among people running out of patience with the ever-changing rules.

All over Europe, governments are imposing new restrictions as cases of the coronavirus continue to surge on the continent.

In England, Prime Minister Boris Johnson introduced on Monday a three-tier national system that shuts down pubs, gyms and betting shops in Liverpool — the only city in the very high-risk category for now.

In France, authorities are adding more major cities to their "maximum alert" list, forcing bars, cafes and gyms in Paris, Marseille and elsewhere to temporarily close.

"It makes my heart bleed that they have to close once again. They closed during the lockdown," said a bar customer in Paris before the restrictions took effect.

In the Madrid region, non-essential travel in and out of the capital and nine suburbs has been prohibited.

The tightening of restrictions comes amid growing "COVID-19 fatigue."

Health experts say an increasing number of people are running out of patience with the ever-changing and often confusing rules.

"I can't see people tolerating another nine months of this. I really can't," said Dr. Chris Smith, a consultant clinical virologist at Cambridge University in Britain.

Smith says governments should come up with carefully balanced guidelines that keep countries as open as possible while keeping the virus under control.

"How much virus can we tolerate spreading?"

He warns against imposing measures that people already hurt economically or mentally would deem too repressive — especially if they are announced without an exit strategy.

"We really do have to look at this quite carefully as to what we're willing to do before quite literally the pill becomes worse than the ill," Smith said.