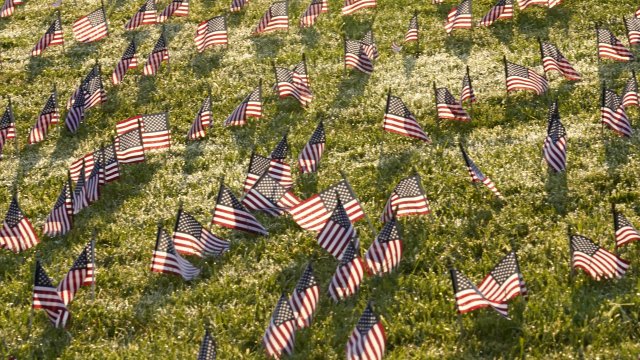 SMS
As Coronavirus Deaths Hits 200,000, Fauci Renews Call To Wear Masks
By Briana Koeneman
By Briana Koeneman
September 22, 2020
The National Mall in Washington marked the grim milestone with a memorial while at a rally for President Trump in Ohio, the crown booed mask wearing.
SHOW TRANSCRIPT

As the U.S. coronavirus death toll reaches 200,000, Dr. Anthony Fauci is once again urging Americans to wear a mask.

"The idea of 200,000 deaths is really very sobering. And in some respects, stunning. We do have within our capability, even before we get a vaccine, which we will get reasonably soon, we have the capability by doing things that we've been speaking about for so long. The simple public health things that are not universally being implemented in our society," Fauci said.

The National Mall in Washington, D.C., marked the grim milestone with a memorial Monday. Volunteers from the COVID Memorial Project planted thousands of American flags in the grass to represent the 200,000 lives lost.

Meanwhile, at a rally for President Trump in Dayton, Ohio, the state's Lt. governor was booed by a crowd of Republican supporters when he urged them to wear masks. A recent poll found about 85% of Americans say they have worn a mask ... all or most of the time.. over the past month in public.

Daily cases in the U.S. have fallen from a peak of more than 70,000 in July to about 40,000 today. Still, the U.S. has by far the most deaths of any country and has reported more than 6.8 million cases of the virus. The U.S. coronavirus per capita rate is about 20,500 cases per one million people ...second in the world behind only Israel.