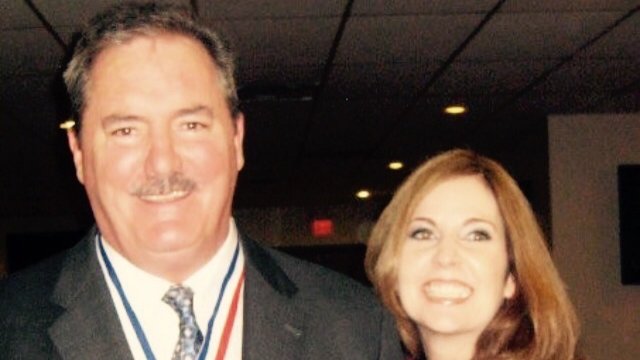 SMS
As A Former NFL Player Fights Dementia — His Wife Fights The League
By Jamal Andress
By Jamal Andress
February 8, 2018
Liz Sullivan married former NFL player Gerry Sullivan more than 20 years ago — but she says she loses the man she married more and more every day.
SHOW TRANSCRIPT

Liz Nicholson Sullivan has been married to Gerry Sullivan for more than 20 years. But she says she loses the man she married more and more every day.

"He's very funny, and he's very bright. … And he is very self-deprecating, which I love. I would say for maybe the first 15 years, we had a great time. We had a wonderful relationship. I saw signs probably the whole time that I was a little bit in denial of. But I would say the last dozen years have been pretty poor," Liz Nicholson Sullivan said.

Gerry Sullivan is a former NFL offensive lineman who played eight seasons with the Cleveland Browns. He started playing football when he was 8 years old and didn't stop until he was in his 30s. He now suffers from dementia and shows all of the signs that come along with a  degenerative brain disease called chronic traumatic encephalopathy, or CTE.

Newsy's Jamal Andress asked: "You mentioned in the past dozen or so years, that's when you started to notice those changes. How did those changes manifest themselves?"

Liz Nicholson Sullivan responded: "Unbelievable rage, unprovoked rage. I'm not talking about your usual driver road rage kind of thing. … Out of nowhere, I'm talking about going from zero to 120, and the eyes change color. They change to black, the fists ball up. … So rage, paranoia, unmitigated aggression and violent thoughts that he would say to me that he felt toward others. That was really frightening."

While former players like Gerry Sullivan are dealing with things like memory loss, constant irritation and depression — their loved ones are fighting their own battles.

"Now, it's out in the open, but for years, so many of us wives would, if we were social with each other or NFL gals and guys, we would say, like, 'Oh, my husband's fine.' We were all lying to one another because the husbands, when they're a certain age, don't want others to know that maybe there's mental illness or they're depressed. ... About seven years ago, at least to Gerry's little circle of friends, I started saying: … 'Sue, does John stay up at night? Does he have trouble sleeping?' And when I first opened up to them, then the floodgates opened. And then social media is what, ... a gal formed a NFL wives facebook page, a private page, and that thing opened the floodgates," Liz Nicholson Sullivan said.

Liz Nicholson Sullivan is one of literally thousands of women who go online to find advice, comfort and camaraderie from other wives of NFL players.

"Finally, I have found you girls. I thought I was going crazy. I thought my husband, ... I thought something was wrong with us. Now I'm hearing that you girls experienced it, too. There is such comfort in that. I can't even tell you," she said.

Sullivan found that comfort and has given it back — becoming an advocate for former NFL players and wives. She, in many cases, is fighting with the very league that connects her to these families across the country. 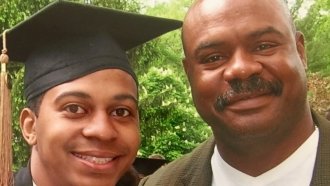 Jamal Andress asked, "I'm curious what it's like for you kind of being in the active back-and-forth with an organization that your husband in large part gave a lot of his life to?"

Since CTE was discovered in 2005, the NFL has had a long and brutal tussle with medical doctors and more recently the families of former players. After denying the link between head trauma and long-term health problems for years, when the NFL finally acknowledged the existence of CTE and agreed to a billion-dollar settlement with the families of debilitated former NFL players.

"The biggest misnomer with the settlement is this: The public led to believe by the NFL: 'Oh, yeah. It's taken care of. These guys all got payouts.' That is so far from the truth," she said.

According to The New York Times, of the 1,400 claims filed as of November 2017, 140 have been approved. While many former players say the league is purposefully dragging its feet, the NFL claims it's just trying to deter fraud.

"'Delay, deny and hope they die.' And that is coined by a former Minnesota Viking Brent Boyd, who is an activist, and he's right. … We feel that it's very much, I won't use the word 'rigged,' but that the cards are stacked against us," she said.

Jamal Andress asked, "Do you think that the sport itself is worth saving?"

Sullivan responded by saying: "I really truly believe that at some point, it will be phased out on its own, and I will not be crying about that. … It's eroding, and I think that's the way it should go. … Personally, as a wife, personally seeing the destruction caused by this, I will not, I will not shed a tear."