Arturo The Sad Polar Bear Will Stay In Argentina 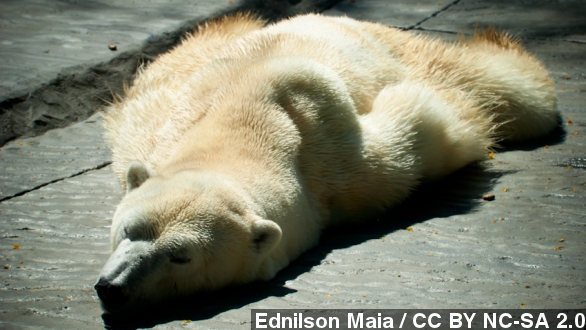 SMS
Arturo The Sad Polar Bear Will Stay In Argentina

By Madison Burke
July 26, 2014
Argentinean zoo officials announced this week they will not be allowing Arturo to move to Canada.
SHOW TRANSCRIPT

29-year-old Arturo has been nicknamed the "world's saddest animal" for looking sad in his small, toasty quarters at the Argentinean zoo. Reports say Arturo often exhibits concerning behavior like baring his teeth and rocking from side to side . (Via YouTube / The Last Atom)

According to The Daily Beast, "Experts say the depression stems from his unnaturally hot environment, lack of adequate water to cool off in, and the absence of other polar bears at the Mendoza Zoo."

However, Arturo wasn't always alone. He lived with another poplar bear until 2012, when it died during a heat wave.

A Winnipeg zoo has offered to house Arturo, and animal lovers all over the world called for his transfer to the cooler climate. Including at least one American politician...(Via Change.org, Care2 Petition Site)

NEWT GINGRICH: "This is very sad and he should be saved, so sign the petition." (Via Facebook / Newt Gingrich)

But, this week the director of the Argentina zoo told the world Arturo isn't going anywhere, saying the bear is too old to travel safely.

Polar bears generally don't live past 30, so Arturo is likely nearing the end of his life. (Vid YouTube / Vid Hab)

One Green Planet called this reasoning "suspicious," pointing out no medical records have been provided proving Arturo is not healthy enough to be transferred.

And Examiner says experts are saying Arturo would fare much better being transported to Canada, then living out the rest of his life in Argentina.

Arturo is currently the only polar bear living in Argentina.