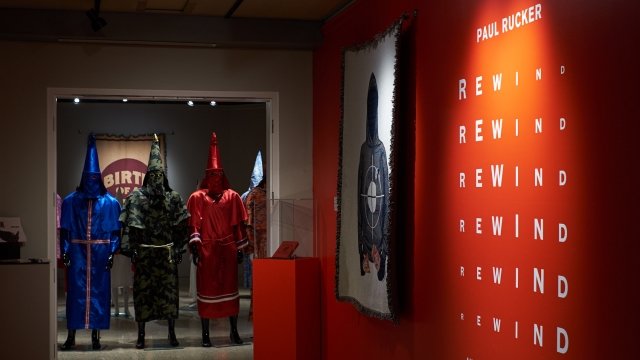 The first thing that will likely catch your eye in this art exhibit are the colorful Ku Klux Klan robes. They're crafted by artist Paul Rucker, who saw a Klan rally in 1989 while growing up in South Carolina.

"One of the reasons I have the Klan robes is to show the changing shape and form," Rucker told Newsy. "... You don't have to wear a Klan robe to have the ideology around white supremacy."

But Rucker's "Rewind" exhibit is more than KKK robes. 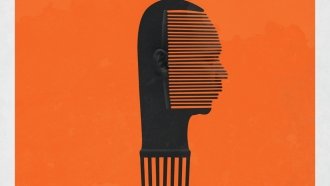 "This show is less about race and more about power," Rucker said, "and who has the power and how they want to keep the power."

"Rewind" examines American history and shows how practices like lynching, slavery and redlining have an impact on the present. Rucker has traveled across the country with the multimedium exhibit and has been to various small towns that might not normally see something like this. Rucker says he doesn't want to "preach to the choir."

"I want to move without fear, and that's what my artwork does," Rucker said. "My father was born in 1905; he was 63 when I was born. He lived during a time if he looked in the wrong direction he could be lynched. I can't be a coward. I refuse to be a coward."

He's received a lot of different responses but isn't too concerned with shocking anyone.

"I can't make anything more shocking in the gallery that you're going to see when you go outside of the gallery," Rucker said.

The goal of "Rewind" is to get informed dialogue to happen, not just conversations based on feelings.

In his spare time, he does work alongside the Prison Policy Initiative on ways to effect change in the U.S. prison system.

"I've had a lot of heat from black Americans with my show touring around," Rucker said. "A lot of them get quite angry, and it took me a while to figure out why they were angry. Because it's a reminder these were not good times. But I think black Americans make their shame what's not their shame."

The exhibit comes with a 30-page informational newspaper. Rucker is also in the gallery during showings to answer questions.