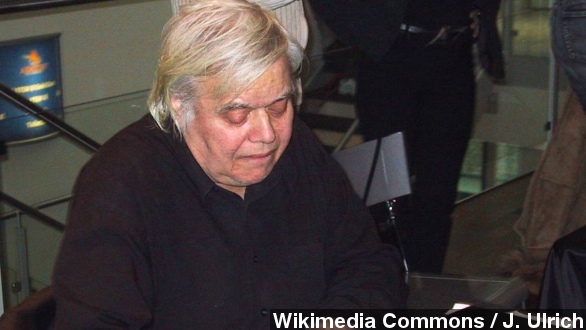 By Steven Sparkman
May 13, 2014
The surrealist sculptor and painter was known for his nightmarish "biomechanical" style, and was heavily involved with sci-fi and heavy metal art.
SHOW TRANSCRIPT

Hans Rudolf Giger, the surrealist sci-fi artist whose work has probably made an appearance in your nightmares at some point, died Monday at the age of 74. (Via Wikimedia Commons / Matthias Belz)

Swiss media report the artist died at a hospital from injuries sustained by a fall in his home. (Via  SRF)

Giger was known for dark, disturbing artwork that blended biology and machine in a style he called "biomechanical."

And his work is so popular, Ars Technica says, "​If you're at all a fan of modern science fiction, you've encountered the man's work, possibly without even realizing it."

But he's best known for designing pretty much everything creepy in Ridley Scott's 1979 masterpiece "Alien." (Via 20th Century Fox)

The story of how Scott picked Giger to design his monster has passed into movie legend. Scott says he was getting frustrated with existing sci-fi monsters until he found his alien in Giger's artwork. He says he'd never been so sure of anything in his life. (Via Flickr / Ars Electronica)

But an editor for Empire Magazine tells the BBC, Giger had already been hired — and fired — by the Alien production team by that point.

"Fox, the studio, were a bit wary of him, and when the actually saw his designs they were horrified. They thought he was sick. And they said 'We can't go any further with this guy' and they fired him. And this was before Ridley Scott was even on board."

Giger won an Oscar for the visual designs in the film, and his work was elevated to global status. It's no surprise, then, that accolades for the artist are now pouring in from all over the art and entertainment world.

Swiss heavy metal musician Tom Gabriel Fischer, who worked with Giger several times, praised "his wit, his perception, his genius, his horizon, his determination, his humour, his friendship, and his immeasurable kindness." (Via Blabbermouth.net)

Scott himself released a statement saying, "He was a real artist and great eccentric, a true original, but above all, he was a really nice man." (Via Time)

Giger himself said his work was about finding hope and beauty in darkness — but he also once said anyone who likes his work is either creative or crazy.