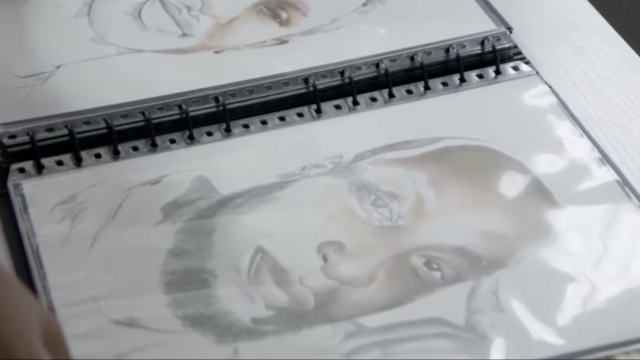 "This is Christian Taylor, who was just 19-years old," Brandon said. "One thing that's special about the series is that it it relates everyone to one another with age."

His sketches give life to those lost. His series "Stolen" is full of portraits of over 80 Black faces and lives lost in controversial incidents with police — deaths that shocked the nation.

"When I kind of start out with each piece, I try to find a way to really capture something that makes them unique," Brandon said.

On what inspired him to create the series, Brandon said, "The ongoing names added to the list of victims of police violence was continuously just making me more and more overwhelmed, and really just just the sadness was becoming unbearable. I wanted to find some way to be a part of the conversation."

All of the portraits appear to be incomplete, but they’re not. They are created with purpose.

"The emptiness really represents the unknown and the unknown of where this individual was going," Brandon said. "What dreams and goals that they have in their life, where were they going with work, with their relationships? And then also just the emptiness that these families and communities are forced to grapple with."

When Brandon is ready to start coloring in blank portraits, he sets a timer for himself. Every year the person lived represents one minute.

"I think having the timer be kind of its own medium in this series is really crucial to the process because as the artist, it makes me internalize it," Brandon said.

Once the timer goes off, he says he is brought back to reality.

"Just the suddenness of these lives that are being cut short, and that anxiety really translates to something that I think a lot of Black Americans feel, and the fear that mothers and fathers and grandparents have with their loved ones, and they're out in the streets and get pulled over by the cops," Brandon said.

Sketches of the faces of Breonna Taylor, George Floyd and Eric Garner have gone viral. But it is the youngest face that has touched every inch of his soul.

"Her name is Ayana Stanley Jones," Brandon said. "She was just seven-years-old, and so obviously those younger individuals, those kids, that's really emotional, and it's really tough for me to wrap my head around it to only spend seven minutes on an art piece."

Brandon belongs to a rising movement of Black artists who use their creations to take the lid off on the historically marginalized Black culture battered with racial injustice.

For Brandon, Black History Month is a time to reflect on individuals, leaders and movements that strived to achieve racial equality.

"It's clear that there's so much work to continue to be done, and there's so many people alive today that are putting in incredible amounts of work and doing so much for our community that it's important to recognize that shining a light on them and to keep pushing forward and so we can get to a place that we want to be," Brandon said.